Jimmy Fallon and Steven Higgins take on the icon roles of Breaking Bad‘s Walt and Jessie. The results are awesome. 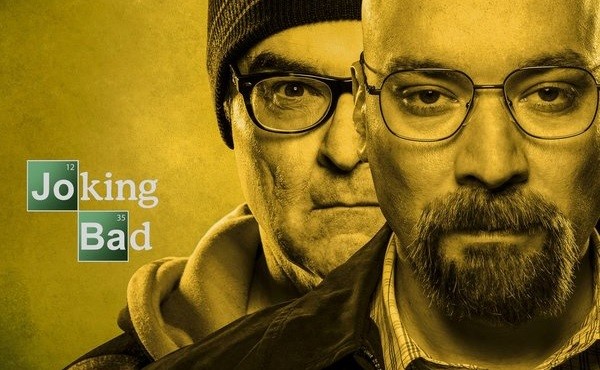 Jimmy Fallon is at it again! Last night on Late Night with Jimmy Fallon, our boy wonder was up to his usual antics, this time with the guys from Breaking Bad.

With the show just weeks away from the series finale, everyone is clinging to their favorite program like it’s the last bag of crack. (Crack comes in bags, right? We’re good girls!) They’ll do anything to extend it just a little longer, to show how much they loved it, to pay tribute to their meth-making gods. Fallon’s way of paying tribute? By making a parody of the hit show involving an underground joke ring.

It may have been a parody, but it still got the seal of approval from all the Breaking Bad stars. How do we know? Because Bryan Cranston, Aaron Paul, Bob Odenkirk and Colin Quinn all show up for cameos on the newest episode of Late Night and a couple even turn up in Fallon’s “Joking Bad” skit. Among the comedy gold: Late Night announcer Steven Higgins in a track suit playing character similar to Paul’s Jessie, who ends all his sentences with “…b****!” Though, Higgins and Fallon doing Pop Rocks and putting on the yellow rubber suits is also pretty great!

Cranston and Paul may have been cool with the skit, but they’re not okay with all of Fallon’s jokes. To find out which one brings B-word out of Paul, you’ll just have to watch the skit!

https://youtube.com/watch?v=duKL2dAJN6I%3Ffeature%3Dplayer_embedded
Jay Leno’s cameo was unexpected, though. Who knew he had a sense of humor? (Burn!)

Breaking Bad ends on Sept. 29, but fear not! At least one of the characters (Walt’s lawyer, Saul) will be making a reappearance on television in the not-so-distant future. AMC just green-lighted the spin-off, Better Talk To Saul. Not exactly the same thing, but we’ll take what we can get.

Want more television news? Our newsletter is the place to be… b****! >>