Daniel Radcliffe will forever be known as Harry Potter, but did he almost go in the exact opposite direction by signing up for Fifty Shades of Grey? 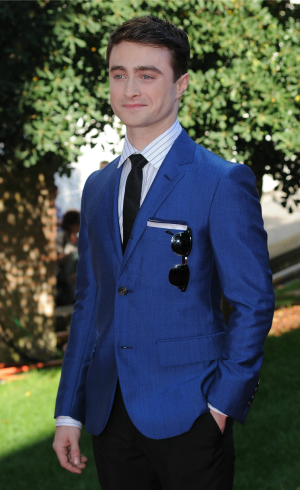 Daniel Radcliffe as Christian Grey in E L James‘ Fifty Shades of Grey? Charlie Hunnam has been cast in the role as the kinky character. The possibility of Radcliffe as Grey seems like a surprise to many, including Radcliffe.

“I literally had someone say to me for the first time today, ‘The world’s in [an] uproar you’re not playing Christian Grey.’ And I’m like, ‘If this is uproar, it’s inaudible.’ I think there was approximately no people wanting me to play Christian Grey, including myself,” Radcliffe explained to MTV News. “I have to say, no offense to anybody, I’m sure they’re going to do a great job on the movie, but it’s not something that I think would have been a good next step for me.”

The idea of a child star like Radcliffe playing such an NC-17-rated character seems a little wrong, and future Harry Potter fans may have been disturbed by their childhood hero turning into the character of Christian Grey (although it wouldn’t be the first mature role he’s played). But Radcliffe is still doing all he can to outgrow his childhood role, and is appearing in many new projects, including Horns and Kill My Darlings.

While he’s not jumping into a role like Fifty Shades of Grey, he’s not looking back, either. Radcliffe said he would never again play the role of Harry Potter (J.K. Rowling announced a new spin-off project, though).

Though the 24-year-old actor was once the star of one of the biggest franchises in the world, he still gets nervous around other stars. He admitted back in 2012 to having a “massive crush” on Katy Perry, and joked about his love for the “Roar” singer.

“Mentally I am very close to Katy Perry, a lot,” he joked to MTV. “I’ve been in a room with her since and I couldn’t say [anything]. I was across a room from her and I was like ‘I can’t. I can’t even say anything, [you’ve] probably seen an interview with me [and] you know these thoughts are in my head. I can’t even look at you.'”

Radcliffe continues to take more grown-up parts, but he may have more growing up to do before taking a role like Christian Grey.