Miley Cyrus stepped out of her hotel in London while wearing strange, sheer pants that showed her underwear-less butt. 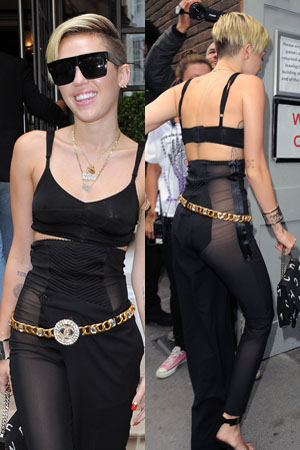 Out promoting her new album, Bangerz, in London Wednesday morning, Miley Cyrus donned a pair of strange pants that showed a large part of her underwear-less bottom.

Cyrus was greeted by fans and photographed as she left her hotel in a very odd ensemble. The pop star waved and smiled at everyone while wearing an all-black outfit that featured sheer pants that exposed her right butt cheek.

Miley Cyrus becomes the talk of the town >>

To top off the interesting pants, Cyrus wore a black bra top, and surprisingly, she hid her midriff with the high waist of the trousers. To accessorize, the “We Can’t Stop” singer wore a bunch of Chanel jewelry, including a gold chain belt, a large cuff bracelet, two more chain bracelets on her other wrist and two large gold necklaces. Cyrus also showcased extra-long red nails and carried a small black purse with a silver chain handle.

The 20-year-old is apparently continuing her new trend of wearing next to nothing, freely showing her assets to fans. Of course, the farthest she’s gone with the no-clothing antics was in her new video for “Wrecking Ball.”

Making huge internet waves earlier this week, Cyrus bared it all in the now-controversial video. Not only did she go buck naked, but she also displayed some very suggestive behavior by writhing on top of a wrecking ball and seductively licking a sledgehammer.

“I think the video is much more,” Cyrus said in an interview on Z100’s Elvis Duran and the Morning Show. “If people get past the point that I’m naked and actually look at me, you can tell that I actually look more broken than even the song sounds.”

While it’s hard to see vulnerability when Cyrus is glaring at the camera while tongue-kissing a huge hammer, she claims she wants viewers to look past it.

“If people can take their minds off the obvious and go into their imagination a little bit and see kind of what the video really means and the way that it’s so vulnerable,” she went on. “If you look in my eyes I look more sad than actually my voice sounds on the record.”

Somehow, it doesn’t seem likely that people will look beyond “the obvious” on this one. If Cyrus wants to seem vulnerable, she may have to wear a bit more clothing, and do a bit less licking of inanimate objects. Cyrus may have some real issues in her life, but she’s probably going in the wrong direction in trying to show it.