Nicholas Sparks’ The Longest Ride follows the parallel lives of two couples whose lives intertwine in unlikely ways. It’s our latest pick for Red Hot Book of the Week.

Nicholas Sparks cranks out novel after novel filled with beautiful love stories that capture our hearts. To date, his books have sold over 85 million copies. From The Notebook to The Last Song to his latest, The Longest Ride, his rich storytelling leaves readers wondering: How does he continue to write so many novels, each seemingly better than the last? The Longest Ride is our selection for Red Hot Book of the Week because it is pure enjoyment from beginning to end. (But this is Nicholas Sparks, after all, so be prepared to shed a tear or two.) 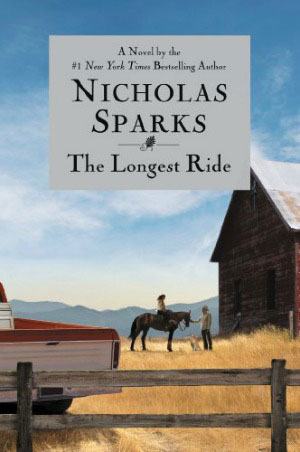 About The Longest Ride

Ira Levinson is 91 years old when he is involved in a car crash. At this point in his life, he’s in poor health and all alone in the world. While he struggles to regain and retain consciousness, a blurry image of his beloved late wife — Ruth, who died nine years prior — urges him to hang on. Ruth does this by recounting stories of their lifetime together. She talks about everything from how they met to the precious paintings they collected to the dark days of World War II and the effect the war had on their family. Ira knows that Ruth can’t really be in that car with him, but he holds on to her words for dear life as he relives the highs and lows that were part of his long marriage.

Only a few miles away, Sophia Danko, who is recovering from a recent heartbreak, meets Luke. Luke is a cowboy and nothing like the clean-cut boys she’s dated before. Through Luke, Sophia is introduced to the world of bull riding, where success and even life and death are at stake every day. They fall in love, and Sophia begins to imagine a future with him — but there’s a secret that could tear them apart.

Ira and Ruth. Sophia and Luke. The two couples have nothing in common, but their lives do run parallel and will eventually intersect. And through it all, they will learn how resilient the human heart really is.