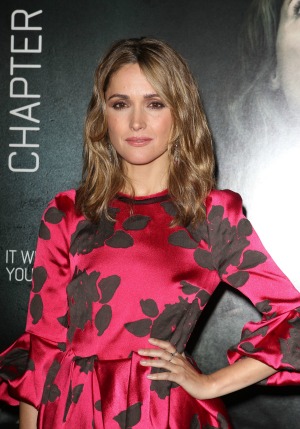 We have watched our fair share of horror films, but luckily none of those have translated into our reality.

Rose Byrne is not as lucky, because she claims that she had a supernatural scare with an ex-boyfriend during a stay on actor Bryan Brown’s farm.

The actress previously starred in the horror movie Insidious and will soon appear again as the mother of a haunted family in the sequel, Insidious: Chapter 2, but it appears that those movies are not so far off from her real life.

During a recent appearance on The Tonight Show with Jay Leno, Byrne was asked whether she had ever experienced something supernatural, and the actress recalled her spooky scenario.

Byrne said, “I had an incident once with an old boyfriend of mine like 10 years ago. We were staying at Bryan Brown’s farm, a very iconic Australian actor, and we were staying in the little shed outside the main house and we were under a mosquito net.”

“He said there was a man, he came to the door and he was standing right there… he was looking at us and he was coming for us. Then the next day we asked Bryan and he said, ‘Oh yeah… he’s here all the time. He’s a local. It’s a ghost. He just shows up.'”

While the Australian actress did not see the ghost herself, she remains unafraid and added, “I’ve never seen one but I’m ready. Ready to go, ready to roll.”

The Bridesmaids actress is convinced that her apartment is haunted because it was previously a funeral home.

Byrne said, “My apartment building in New York is actually an old funeral home… but I’ve never seen one (a ghost) there so I don’t think they like me.”