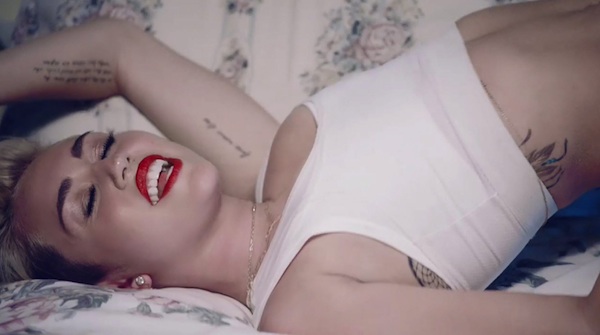 And that was just the beginning.

Currently, the Vevo music video for Cyrus’ second single off her album Bangerz, set for release on Oct. 8, has well more than 55 million views. The video for “Wrecking Ball” was released Sept. 9, which equates to about 26 million views a day.

Cyrus’ Twitter account covered her Vevo history-in-the-making progress with a series of ecstatic tweets by the former Disney television star.

The music video quickly garnered a fair amount of controversy over discussion of its highly sexualized theme, likely influenced by the infamous photographer Terry Richardson. The music video for “Wrecking Ball” includes many frames of Cyrus writhing over concrete, footage of a naked Cyrus sexually straddling a wrecking ball and a make-out session with a mallet.

The only 3 things you need to know about twerking >>

Cyrus’ music video for “Wrecking Ball” is well on its way to becoming one of the most popular Vevo videos of all time, even in just a few days of its release. Known as “Vevo Certified,” this honor is reserved for music videos that have more than 100,000 million views. In two days, Cyrus is more than halfway to that milestone.

She promised her fans on Wednesday via Twitter that once her “Wrecking Ball” video hits 150 million views, she will release the full-length director’s cut of the music video.

Given Terry Richardson’s salacious reputation and the already sexual nature of the current Vevo version, it’s safe to assume the director’s cut will be an even bigger shock to fans still adjusting to Cyrus’ new hypersexualized image.

Kourtney & Kim Kardashian Are Unrecognizable in This Throwback With Dad Robert