Just released photos of The Vampire Diaries shed light on the new life Bonnie, Elena and Caroline are entering. Yeah, two are vampires and one is dead, but we’re talking about college here. 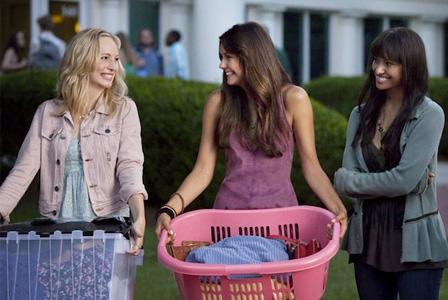 Dead, undead, whatever you want to call it, it isn’t stopping Elena (Nina Dobrev), Bonnie and Caroline. New photos from The Vampire Diaries show the girls living it up as they move onto campus.

When we last saw the show, Bonnie gave her life for Jeremy’s and Elena made Katherine take the cure, which ruined her own chances of ever being human again.

The photos mysteriously leave out any of the goods (aka images of Stefan (Paul Wesley) and Damon (Ian Somerhalder)) though we do get a taste of Jeremy Gilbert. We would call him the “little brother,” but let’s be real. He isn’t little anymore at all, anywhere. Those biceps he’s sporting are about as big as Elena’s head. 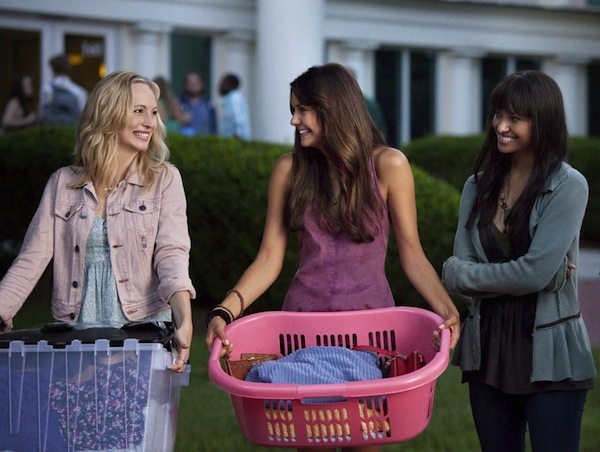 Notice how Elena and Caroline are looking at each other. Both hold baskets of clothes. Bonnie holds nothing and seems to be in the background. I don’t think they can see or hear her. 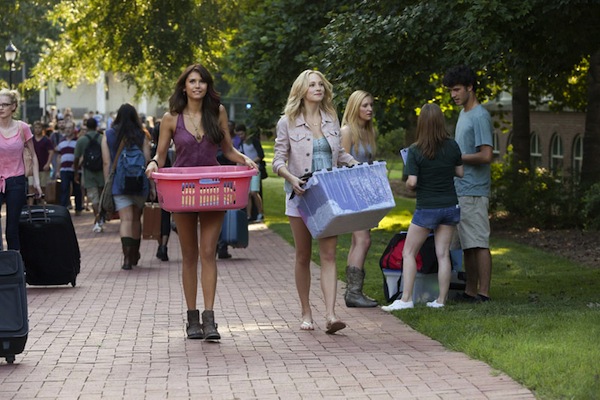 A missing Bonnie doesn’t seem to be stopping Elena and Caroline from enjoying move-in day. Look at those grins! 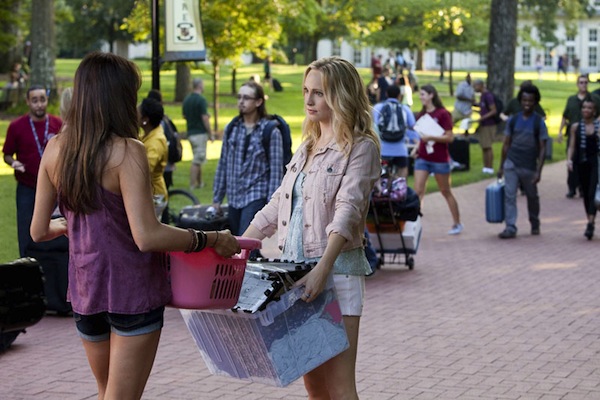 Uh-oh, Caroline has on her worried face. Could the girls be taking a moment to miss Bonnie? Or does vampire Elena have some mischief up her sleeve? 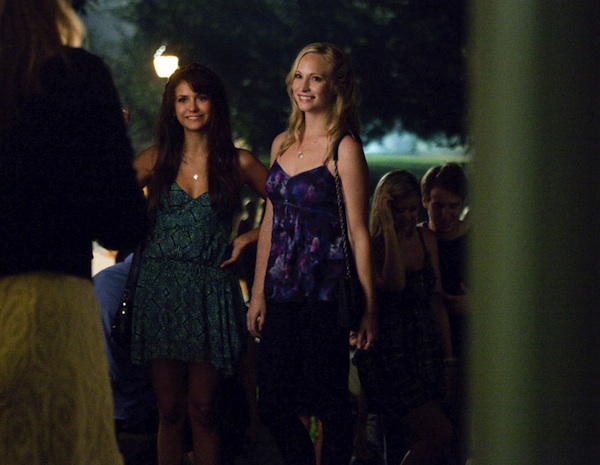 It looks like the girls aren’t wasting any time before becoming typical college students. It’s time to party!

Recap of the Season 4 finale of The Vampire Diaries >> 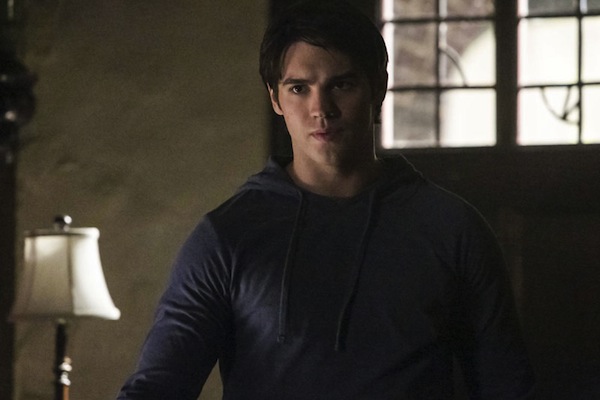 Well, hello there, Jeremy Gilbert. You’re looking alive and well. Ah-hem. Excuse us while we go find a fan. 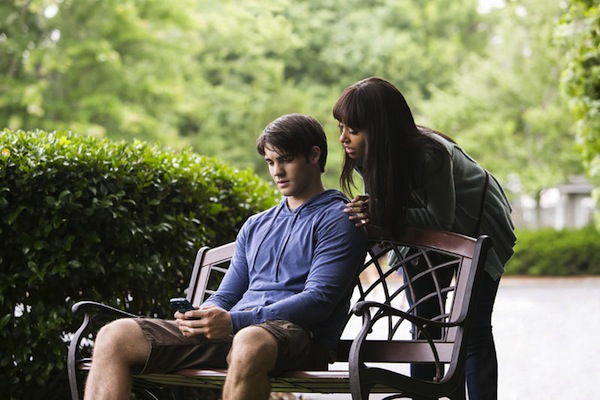 Dead Bonnie whispers in Jeremy’s ear. This romance is bound to get interesting. 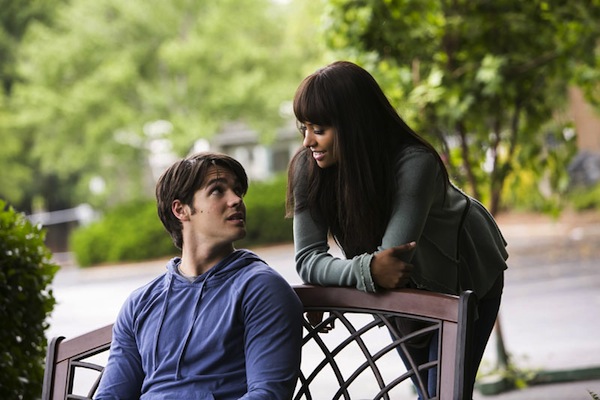 You can look, but you can’t touch. So Jeremy can see and speak to Bonnie, but we’re guessing intimacy of any kind will be a little complicated. We doubt it’ll stop them from trying. 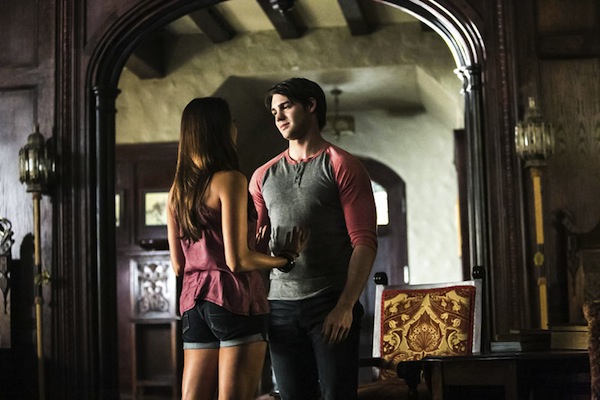 Awe, look at the sibling affection. Seriously, look at his arms! And look at the house. That’s the Salvatore house if our eyes don’t mistake us! Where’s Damon?

Ian Somerhalder is “not thrilled” about The Originals >> 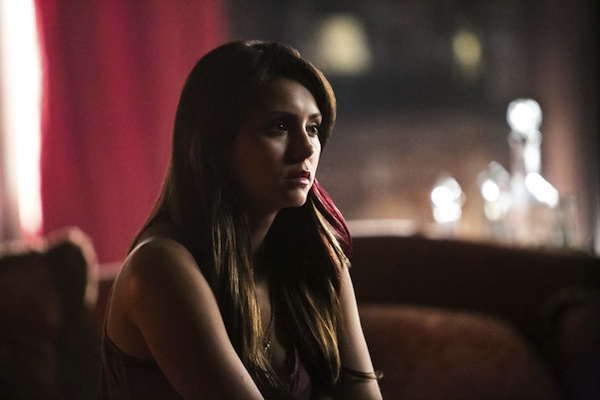 Elena is still sticking with that pink hair even though she’s back on the good side. That seems so last season. Is pink hair even a thing anymore? Over it!