Although it’s tempting to lump all the junior singers on the market together, this little gem stands out with a lot of power, not to mention she reminds me of a famous, established diva. 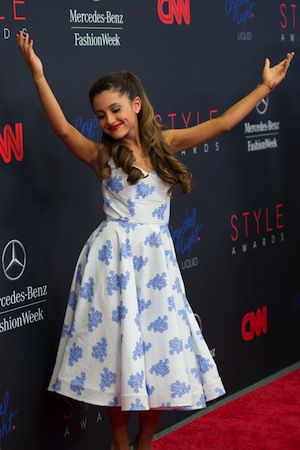 I know I couldn’t be the only person who was in shock that Ariana Grande’s “The Way” sounded strikingly like an old-school hit. It was nostalgic, but for reasons that I could hardly fathom.

Is it possible that this 20-year-old is walking in the footsteps of the legendary Mariah Carey? Sure sounded like that to me.

Does Mariah Carey lip-synch? Check out our poll here! >>

Her airy-yet-powerful vocals that seemingly danced on notes and soared through the air and nestled comfortably in my ears, reminded me of Carey. Granted, before you kill me, she does need more training, but she shows enough promise for me to make this conclusion obviously.

Now that she’s faced the unfortunate circumstance of hemorrhaging her vocal cords, she is being forced to take a momentary break from singing. But fret not music fans, she recently graced the shelves with the presence of her newly-minted album Yours Truly on Sept. 3.

With that said, there are several songs I recommend, but I will single out only two for you here. The runner-up was the remix-ready “Better Left Unsaid,” which I found ironic as I didn’t even know she was old enough to enter a club, but here she is producing tracks that could be played in one.

The winner of my attention goes to “Daydreamin’,” which could remind you of the powerhouse Jessica Simpson with the laidback style of Emmy Rossum. But of course, as I mentioned before, I mostly thought of Mariah Carey as a resemblance.

Didn’t know Emmy Rossum could sing? Check out our favorite off her album here! >>

Before you set your fingers in “attack” position to blast me in the comments, I will forewarn you that her delivery still has room to grow to fit into the steps of Ms. Carey. But, in the meantime, enjoy the budding talent that is Ariana Grande, and if you like the taste you get from this, check out her whole album.

Want to know what other albums are out? Stay updated with our newsletter >>

Oh, and if you are anything like me, don’t feel bad for listening to this gumdrop pop, because feel-good music knows no age!