The stress of Kristen Stewart’s split from Robert Pattinson is reportedly taking a toll on her famous brown hair. 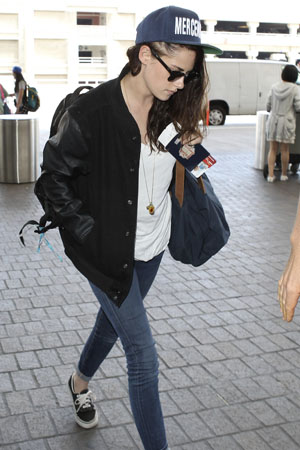 Kristen Stewart and Robert Pattinson finally called off their on-again, off-again relationship earlier this year. Pattinson seems to have moved on, but sources tell Now magazine that the actress is still “stressed out” by the breakup — and it’s causing her to lose her hair!

The actress is now filming Sils Maria in Berlin with a noticeable bald spot on the side of her head.

“Kristen’s circle are so concerned about her that two of her friends have flown to Germany to see her,” a source told the magazine. “They want to take her to a de-stressing yoga retreat on the outskirts of Berlin. They’ve also begged Rob to visit her on set. They fear the stress is getting worse because she’s been trying to make contact with him and he’s ignoring all of her calls.”

She’s reportedly trying to hide the spot beneath ponytails and hats, but the problem is getting worse, sources say.

We have to wonder, though: Can stress really cause hair loss? Yes, according to Dr. Ryan Welter, chief surgeon at the New England Center for Hair Restoration.

Stress can play a significant role in the loss of hair follicles, according to Dr. Welter. Actresses are notoriously busy and may not be eating correctly or sleeping well, which plays in to hair loss.

However, Stewart’s hair loss isn’t necessarily caused by stress. Hair extensions can make things worse because the weight of the extensions harms the hair follicle, according to Dr. Welter.

Stewart isn’t the only celebrity in Hollywood with hair problems. The Newsroom star Olivia Munn recently admitted to People that she suffers from trichotillomania, or anxiety-induced hair-pulling.

“It’s the same thing as people who bite their nails,” she told People, adding that she pulls out her eyelashes rather than the hair on her head.

The disorder typically affects women and starts in adolescence, but Munn said her symptoms didn’t start until she turned 26 years old.

“If I were to walk into someone’s birthday party, I’d have a bad anxiety attack,” she said.

We have to wonder: Is Stewart suffering from the same thing? We hope not… especially since she has some of the shiniest, most envy-inducing hair in Hollywood.