Everyone loves a good cover tune, even chart-topping rock bands. That’s why Imagine Dragons flew all the way to London to cover a Mercury Prize-nominated band. 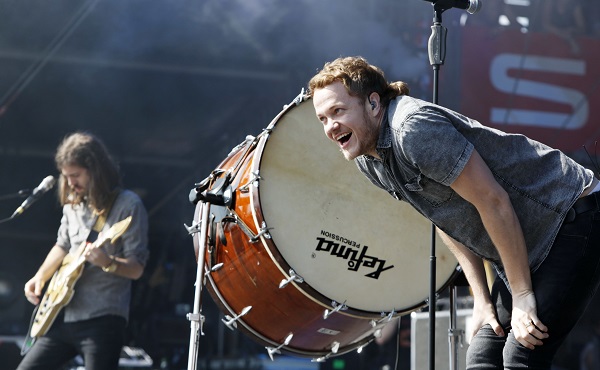 Las Vegas’ very own Imagine Dragons took over the popular BBC 1 Live Lounge yesterday during the radio show hosted by Zane Lowe and Fearne Cotton. They weren’t there to chat, though — they were there to make music. As is the tradition on Live Lounge, Imagine Dragons came to cover one of their favorite songs. The results of that cover were absolutely spectacular.

The Dragons decided to cover “Not Giving In” by the Brit band Rudimental, who just yesterday were nominated for the prestigious Mercury Prize. On the surface, it may not seem as though the Dragons have much in common with the electronic band. However, deep down, their roots are closer than you can imagine. A little time with Imagine Dragons’ Night Visions and you’ll know they excel at writing upbeat and inspiring music. Nothing is downtrodden about Imagine Dragons’ music and the same can be said about “Not Giving In.”

For having been recorded live at a radio studio, the track is not only anthemic and easily just as good as the original, but it’s technically sound, too. There are no mistakes. Just sheer musical perfection. Take a listen:

It’s no surprise Imagine Dragons nailed the cover — they know their stuff. The band has only been around since 2008 and their debut album only released a year ago. Time is nothing to this band, though. They’ve already rocketed up the charts and crash-landed all over the radio. You can’t spend an afternoon channel surfing without hearing their singles “It’s Time,” “Radioactive” and “Demons” all in a rather limited time span. They’re modern rock music at its finest, with their uplifting lyrics, clever beats and intense stage dynamic. They can take a crowd of people who only know them from the radio and turn them into fanatics after just a few songs. They’re that good and they’re that lovable.

We’re not suggesting you do anything illegal or anything, but you should find a way to make Imagine Dragons’ cover of “Not Giving In” a daily listen. It’ll get you through the workday. Enjoy!