All the Doctor Who news that is news… even though there isn’t much of it. 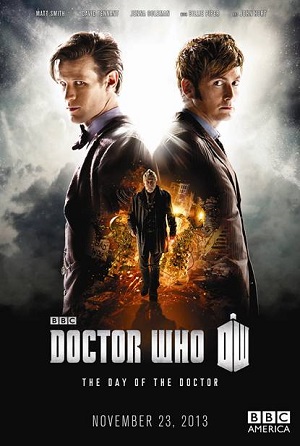 The BBC is dragging out the release of details for their upcoming Doctor Who 50th Anniversary Special. We still don’t know the whole plot line. We can, however, tell you a few minor details. Commence your pants-peeing now, fangirls and fanboys!

First and foremost, take note of the official “poster” for the episode. In case you missed all previous announcements: Yes, David Tennant will be returning for the 50th Anniversary Special. We imagine he’ll return as “Ten Too,” the one-hearted version of the tenth Doctor whom the Doctor left with Rose (Billie Piper) in their last episode together and shortly before the tenth Doctor regenerated into the eleventh, played by Matt Smith. Tennant and Piper will both appear in the episode, alongside John Hurt, who will be on-board to continue where he left off in the most recent episode of Who, as the Galifreyan who “broke the promise” of the name “Doctor.”

Prince Charles geeks out on Doctor Who set >>

We also know the title of the episode! It’s not very telling, but it’s called “The Day of the Doctor.” It would have to be, since it will feature three “Doctors” in one episode. Bonus: It will run about 20 minutes longer than the average Who episode, lasting 75 minutes or a full feature length.

They won’t tell us any more right now (because they love to watch us squirm), but we do know the episode will air on Nov. 23. It is sure to be quite the emotional episode. Not only will it mark the one-time return on Tennant and Piper, but it will also be Matt Smith’s second-to-last episode before he regenerates into the twelfth Doctor, to be played by Peter Capaldi.

We’ve been promised more news in the coming weeks and we promise to bring you the details as soon as we receive them!