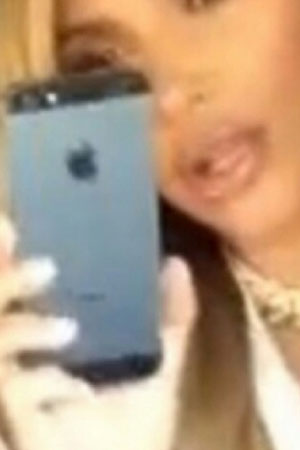 It’s not exactly news when Kim Kardashian posts a photo to Instagram — unless, say, she’s posting a picture of baby North West. However, she definitely caught our attention with a blurry shot posted to the photo-sharing site on Monday. Surely Kardashian knows how to take a clear photo, so what’s up with the weird filtering?

Well, now we know: Kardashian is actually using the new iPhone 5s to take her “selfie.” The new version of the popular Apple device — announced on Tuesday — won’t be on sale to the public until Sept. 20. It’s believed she blurred the photo to try to obscure that it’s the new phone.

No such luck, Kim.

So, does the reality star really have that much pull in the tech world? Apparently, now that she’s with Kanye West. The rapper — who compared himself to late Apple visionary Steve Jobs earlier this year — is now dipping his toes in the tech field. He’s so obsessed with all things Apple that Kardashian gave him a pair of two Apple mice signed by founders Steve Jobs and Steve Wozniak.

Wozniak was even one of the first people to meet North West after Kardashian gave birth in June.

“I have seen a lot of babies and a baby represents the love between the people, and that meant more to me,” the Apple co-founder told CNN’s Piers Morgan. “And the love that Kim was showing to Kanye — just because he was interested in technology and companies, she, as a birthday present, she had me come up there to meet him.”

“Unbelievable that a woman would do that,” Wozniak added. “I think she’s just doing everything she can to show her love to her man.”

So, can we assume that Kardashian’s obsession with her BlackBerry is officially over?