Outspoken star Courtney Love drank some haterade and threw insults at some big-name stars — but reserved some nice words for her surprising pals. 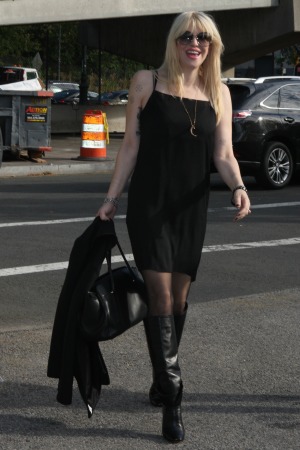 Courtney Love managed to insult a whole handful of stars during a New York concert last night. The outspoken celeb voiced her opinions on four different pop acts, and even when trying to be nice managed to throw a backhanded “compliment.”

Between songs at a performance during New York Fashion Week, Love commented on Cyrus’ VMAs stunt, “I liked Miley, frankly. I’m gonna be honest, Katy Perry bores the s*** out of me. She’s a nice girl, she just really bores me. You know, that hillbilly Miley Cyrus is sort of punk in a weird sex way.”

She then had a few words for Robin Thicke. “Can someone inform me who Alan Thicke’s son is? Like what? Wasn’t [he on] Charles in Charge? That’s like Jared Leto trying to convince me he’s a rock star.”

She later elaborated to Page Six, “[Perry] bores me. [Miley] was at least kind of punk rock, you know? It was openly sexual… like dark and hillbilly and f***** up.”

But there are at least two people who Love loves: Gwyneth Paltrow and Lady Gaga. She told NY Mag that she and Paltrow are practically besties, and she adores Gaga’s bravery.

“Gwyneth is one of my best friends… She’s a great mentor,” Love said. “Gwyneth has never, ever given up on me — even when I was on Adderall and stuff, and I love her for that.”

And Lady Gaga? “She’s going through a lot of changes, and has been hanging out with Marina [Abramovic] and also my friend Klaus [Biesenbach], and sort of discovering that side of herself,” she said. “I really like the natural thing [she’s doing lately] — I mean, I’m sure she’ll go back to Gothic stuff. But she heard that I was going to leave so she came to find me. It was cool — like the popular girl came to tell me not to leave lunch hour.”

“She’s been around gay guys her whole life, and I think she’s finally trying to get her own identity and find out who she is. I thought it was very brave of her at the VMAs to put boos in her audio track.”

Tell us: Do you think Gwyneth Paltrow knows she’s BFFs with Courtney Love?