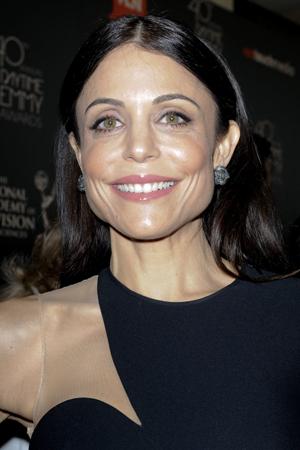 Most celebrities guard their personal lives like they’re guarding government secrets. Or, if they do talk, they make it seem like their lives are always happy and perfect.

Not Bethenny Frankel: The new queen of daytime talk isn’t afraid of putting all of her business out there, warts and all.

The outspoken reality star stopped by her old Bravo stomping grounds on Tuesday night’s Watch What Happens Live! and admitted to Andy Cohen that “fundamental differences” are the reason she’s divorcing her husband of two years, Jason Hoppy.

Frankel also confirmed the rumors that she still lives with Hoppy in their swank Tribeca condo. “I mean, you see us coming in and out of the apartment…” she said when Cohen asked about their living situation.

Host a girls’ night in as Bethenny Frankel would >>

The situation has been a “very difficult time,” but she’s learning to cope.

“You just don’t get more than you can take and you keep moving and you prioritize,” she added to Cohen. “I have gained so much respect for women and how they can endure so many different things, you know, being a mom and getting their kids to school and going to work and dealing with personal issues.”

Our September Girl Crush is also the cover girl for the new issue of People. In the interview, Frankel says that she’s in no rush to find a new relationship.

“Men aren’t a priority right now — at all,” she tells People, adding that she’s probably not going to change her mind any time soon.

“Since I’m emotionally unavailable,” she continues, “it may be a very chilly winter.”