Zoe Saldana and Marco Perego married in secret in a very small and intimate ceremony. 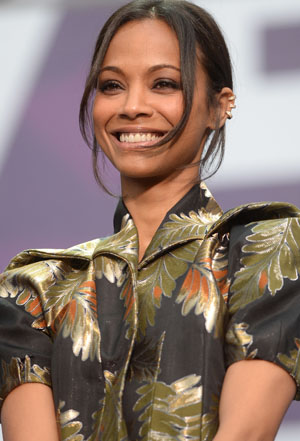 Zoe Saldana is married! The Star Trek actress and her beau, Italian artist Marco Perego, secretly got married in London this June.

The pair decided to tie the knot in a very intimate ceremony with just a few friends and relatives, and kept it a secret until now. “It was super small but very romantic and beautiful,” a source told Us Weekly.

When getting cuddly with each other this past May in Los Angeles, Saldana and Perego sparked romantic rumors. But other reports claimed they were just good friends. In fact, the newlyweds have actually “known each other for a long time,” the Us source added — they just kept their romance quiet.

Prior to her relationship with Perego, Saldana had dated Bradley Cooper on and off from 2011 to 2013, although the couple never got serious. However, before Cooper, the Avatar star had broken her engagement to businessman Keith Britton after dating him for 11 years.

“When it didn’t work [with Britton], it was heartbreaking for the both of us, but it’s life” Saldana told In Style magazine in an interview earlier this year. “I’m not one of these people who’s going, ‘Oh, because I was with someone for so long I need to take a break.’ What if love is just around the corner?”

Lucky for her, that’s just how it actually turned out!

Saldana claimed that not only was she ready to find love again, but that she was also ready to settle down and start a family in the next year.

“I’m Latin — we start young, honey!” the actress told Lifetime on The Conversation With Amanda de Cadenet in April 2012, claiming that at 22, she was already ready for children.

“I love the anxiety, the pressure of the loud room full of yapping kids,” she continued, “A child makes perfect sense to me. A child speaks more sense than an adult half of the time.”