Kanye West decided to show his girlfriend’s ex, Ray J, on Late Night with Jimmy Fallon just what he thinks of him… 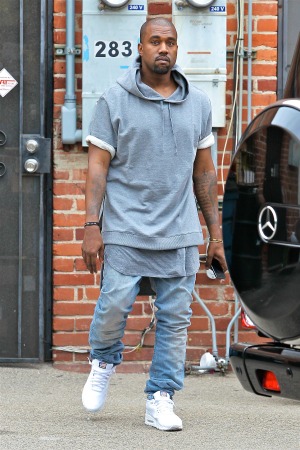 You’re most probably all familiar with how Kim Kardashian shot to fame back in 2007, after her ex-boyfriend and R&B singer Ray J leaked a sex tape of the pair getting hot and heavy.

Well, since those events, Ray J earlier this year decided to release a track titled, “I Hit It First,” which hints at the fact that Kardashian should still be in his bed.

The tell-tale lyrics include the lines, “She might move on to rappers and ballplayers, but we all know I hit it first.”

“I had her head going north and her a** going south, but now baby chose to go west.”

“No matter where she goes or who she knows, she still belongs in my bed.”

Needless to say, the single has not impressed Kanye West — who just welcomed his first child in June, daughter North West, with girlfriend Kim Kardashian — and the rapper decided it was time to hit back!

What better place to get your message out, than perform unannounced on Late Night with Jimmy Fallon in New York on Monday? West crashed the party and was joined by former Gap Band singer Charlie Wilson.

Changing up the opening lyrics to his track “Bound 2,” West rapped, ”Brandy’s little sister lame, man he know it now… When a real brother hold you down, you ‘sposed to drown. (sic)”

Although Ray J was not mentioned by name, there is no denying that the lyrics were about him, as he is the younger sibling of Grammy-winning singer and actress Brandy. However, instead of referring to him as her little brother, West took a stab at Ray J’s masculinity, referring to him as a “little sister.”

So, what did Jimmy Fallon have to say about the events occurring on his show?

Fallon said Monday on Twitter, “Cool thing about doing a show in NYC — anyone can drop by, @KanyeWest surprised us and performed ‘Bound 2’ tonight on Late Night! #nojoke.”