After we saw Eric go up in flames in the finale of True Blood, our hearts burned along with him. How can we watch the show without Alexander Skarsgard? The answer is finally here: We won’t have to. 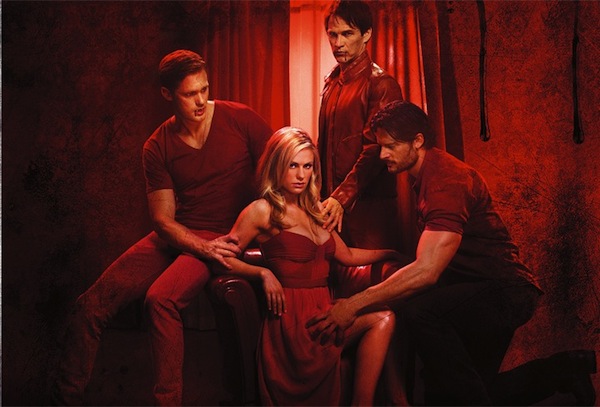 Brian Buckner is a smart man.

In an interview with TVLine, the True Blood showrunner had this to say: “I’m not going to take Alexander Skarsgard out of people’s living rooms.”

And now we all can breathe a sigh of relief. Eric will be returning as a regular character in Season 7.

True Blood: What we’ll be waiting for in Season 7 >>

The sexy Swede bared it all on a snowy mountain in the Season 6 finale, right before he erupted into a ball of fire. His magic faerie blood lost its power. The question on everyone’s mind as we sat up a little straighter in front of the TV, eyebrows shooting up on our heads was, “What. Just. Happened?” All seemed hopeless for our Bon Temps sheriff.

Buckner was sure to mention it won’t be an easy ride off the mountain for Eric. To come out unscathed after the fire incident, “would be an incredible cheat.”

“Pam has gone off in search of Eric,” Buckner said, “and maybe she’s going to find him, y’know?”

Buckner also gave us a peek into the next and last season of the series, which will air next summer.

He said the theme of the final season will mimic that of the first and simply ask the pivotal question: Can vampires and humans coexist peacefully? Now that the vampires and humans have been forced together against the Hep V intoxicated force heading into town, the dynamics are changing.

“There are complicated relationships now because they’re feeding — it’s not necessarily sex, but things get confused sometimes, especially in vampires’ minds — so you’re going to be looking at a number of complicated three-way, four-way relationships.”

Buckner continued, “For every human a vampire; for every vampire a human.”

As for Sookie (Anna Paquin), she’s heading into another love triangle, with the question, “Can Bill be forgiven?” at the center. With Eric off doing his own thing, Alcide and Bill (Stephen Moyer) will take the spotlight as her suitors. Though she’ll continue her relationship with Alcide, Bill will come to light as genuine and earnestly searching for peace after all his bad actions.

As from the beginning, the show is about growth for Sookie. She’s made it clear for a few seasons now she’s done with vampires. Despite being tricked and manipulated by Warlow last season, she’s stuck to her gut. Will Bill finally be the vampire to make her cave or is Alcide her soul mate?

Who do you want to see Sookie end up with at the end of True Blood? Will it be Alcide, Bill or neither?