Khloé Kardashian has been putting on a brave face in light of her husband Lamar Odom’s troubles. Can their marriage be saved? 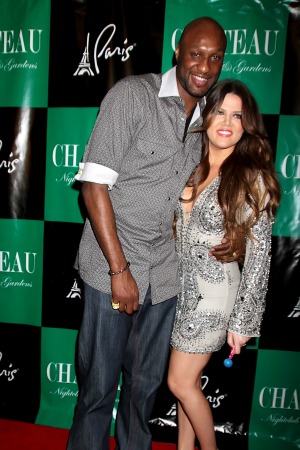 Times are tough right now for Khloé Kardashian, who has lost any sort of communication with her husband Lamar Odom. In light of his drug addiction, infidelity and recent DUI arrest, it’s getting harder for the reality star to save her marriage.

A source told E! News that a “divorce seems imminent” for the couple since the NBA player is more focused on avoiding friends and family members who want to help him with his issues.

The insider shared, “Khloé gave Lamar an ultimatum: if he didn’t get help, she’d end the marriage. So far, he’s ignoring her. The situation can still turn around, but at this point, divorce seems imminent.”

The 29-year-old is leaning on her family for support during these trying times because every minute of their marriage is being played out in the media.

“Her family is being as supportive as possible,” said the source. “They don’t want to argue with her or make her even more upset. They know she’s already heartbroken. They don’t want to make things harder on her.”

Lamar Odom’s drug dealer bailed him out of jail >>

It will be interesting to see how the family’s reality show handles the ongoing crisis since they’re currently filming Keeping Up With the Kardashians. Khloé was spotted wearing her wedding ring during the shoot on Monday.

The only statement Odom’s beleaguered wife is making is through her Instagram account with her selfie photos.

Odom, who is currently a free agent and unsigned for the upcoming NBA season, was caught by TMZ cameras on Sept. 9 in Studio City, a neighborhood of Los Angeles. He denied having a drug problem and insisted that he was talking to Khloé.

“That’s my wife, man,” he laughed when the cameraman asked if he had talked to her.

The troubled athlete might be the only one who believes that statement.