Liam Hemsworth has a fun night out without fiancée Miley Cyrus. 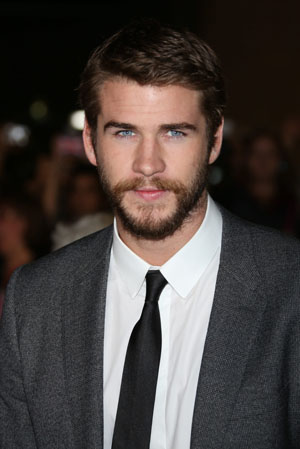 Supposedly engaged Liam Hemsworth stepped out for a fun night with his friends, while his fiancée Miley Cyrus was nowhere in sight.

The Hunger Games star was seen talking to his pals at the Pinz Bowling Center in Studio City, California, looking casual and relaxed. His group consisted of six friends, which included four girls, although Cyrus was not one of them, according to an eyewitness.

Did Miley Cyrus and Liam Hemsworth really break up? >>

Hemsworth and his friends smoked a few cigarettes outside the bowling alley as they talked and laughed before going in. Looking very laid back, the Australian hunk wore skinny jeans and a t-shirt with a flannel shirt over one shoulder. He also had on a beanie cap and a scruffy beard, á la Robert Pattinson.

While any engaged man is entitled to an evening out without his love, in Hemsworth and Cyrus’ case it actually raises a few eyebrows. The pair hasn’t been seen together since they walked the red carpet for the Paranoia premiere, in which they appeared to be “very distant” from each other, according to Us Weekly.

“Miley and Liam acted like they didn’t even know each other the entire night,” a source told the magazine, “She was wearing her ring, but they acted as if they were strangers.”

Hemsworth also left Cyrus behind when he went to the 2013 Toronto Film Festival to support his brother, Chris Hemsworth, and his new movie, Rush. Hemsworth’s solo appearance at the TFF further fueled rumors that he and Cyrus are having relationship troubles.

After Cyrus’ controversial performance at the Video Music Awards two weeks ago, Hemsworth was mortified by the outrageous display. He’s had enough and just “wants to make a clean break,” an insider told Us Weekly. “No more back and forth.”

No word yet, however, on how Hemsworth feels about Cyrus’ just released, scandalous “Wrecking Ball” video. In the clip the former Disney star appears totally naked while doing inappropriate and suggestive acts with a huge metal ball and a sledgehammer.

But, as private as Hemsworth is about his personal life we may never find out…