It’s been a rough couple of weeks for Khloé Kardashian and her hubby of nearly four years, NBA player Lamar Odom. Between Odom’s (super-) short stint at rehab for drug abuse and continued rumors of affairs on his part, the pair may soon be kaput. Here’s why we’re hoping they don’t call it quits! 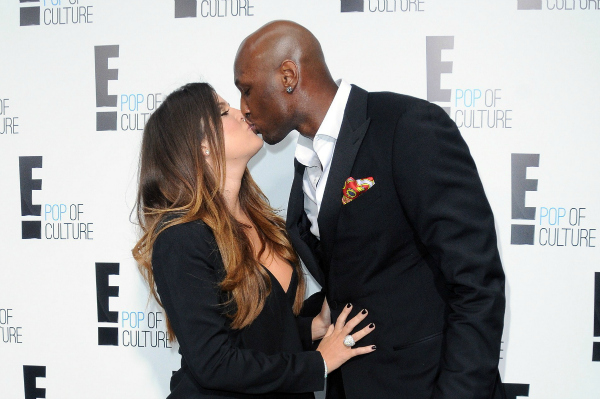 It would break Kardashian’s heart

C’mon, Khloé Kardashian is easily one of the coolest members of the Kardashian clan. Among her endearing traits? She’s brutally honest, funny as hell, fiercely loyal and not afraid to be silly. And after eight seasons of watching her on Keeping Up with the Kardashians (not to mention Khloé & Lamar and the other E! spin-offs), it is pretty evident that she’s the kind of person who —when she lets her guard down — puts her whole heart into her relationships. It would be a shame to see her get crushed under the weight of a failed marriage. Kardashian’s a tough chick, no doubt, but no one escapes a broken heart unscathed. The last thing we’d want to see happen is for her to become jaded and closed off to the idea of love. After everything she’s been through, this pop-culture princess deserves her happily ever after!

Their romance seems to be the most genuine of the fam

When Kardashian and Odom got hitched a mere one month after meeting at a party for Odom’s ex-teammate Metta World Peace, some people (OK, virtually everyone) jumped to the conclusion that Kardashian was either preggers of that the marriage was one big publicity ploy. In the nearly four years since, though, the low-key couple has won over critics with their genuine — gushy even! — affection for each other. When it comes to the Kardashian family, there aren’t exactly many shining examples of happy couples. Kris and Bruce sleep in different beds (and sometimes different houses), Kourtney and Scott are infamous for breaking up over Lord Disick’s behavior, and Kim and Kanye are really too new to tell — although we’d have an easier time making a judgment if they spent a bit more time together on the same continent.

Did you watch Kardashian and Odom’s wedding? The way he looked at her, the way he opened up about his sad past — we began rooting for him right then. Over the years, his laid-back approach to the seemingly endless shenanigans of the Kardashian fam has only made us like him more. I mean, could you deal with all of them so gracefully? We’re also pretty keen on what a cute big brother figure he’s appeared to be for Rob… even if we think the three of them all living under one roof is a bit much. We just want Odom to turn out to be the good guy that Kardashian fell in love with and not a creepy ol’ pimp-hat-wearing dude like his dad.

Kardashian and Odom’s relationship has been fodder for the rumor mill ever since the couple’s whirlwind courtship started pointing down the aisle. We can only imagine what it’s like living in a world where your every move is scrutinized, particularly when your most intimate relationships routinely come under attack. This is a universal truth: marriage is hard. It takes a ton of trust, the most steadfast of which can still be shaken when someone outside of the relationship plants a seed of doubt. And there’s been plenty of seed-sowin’ in Kardashian and Odom’s four short years of marriage. There’s little the gossip rags haven’t accused one or both of them of doing to each other (or, you know, to other people). Which brings us to our next point…

It would validate the rumors

Well, maybe not all of the rumors but, if Kardashian and Odom call it quits, it seriously makes it seem as though the claims that have been cataloged by the rumor mill — the lies, the addictions, the cheating scandals — have some modicum of merit. After all, his rumored drug use has been substantiated by a reported mistress… what’s next? This much we know is true: For Kardashian to walk away from the man she considers the love of her life, there would have to be some deeply shady stuff staring her right in the face. And from what we hear, Kris Jenner is all but putting together a dossier detailing Odom’s indiscretions to try to snap her daughter out of her “I’m so in love I’m in denial” state. Bottom line? We hope none of the rumors are true, thus making Mrs. Jenner’s file o’ facts irrelevant — and giving this cute couple a shot at staying together.