Kim Kardashian’s maternity photo shoot was not the saccharine-sweet standard fare. Her artsy images are raising eyebrows for their uniqueness. 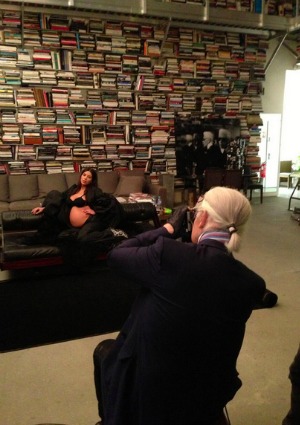 Combine a then-pregnant Kim Kardashian, famed designer Karl Lagerfeld and the CR Fashion Book and what do you get? A seriously weird maternity photo shoot.

Taken in late May just weeks before she gave birth to daughter North West, the photos show Kardashian in black satin pajamas with her bra and belly hanging out; holding a jar of jam with remnants of the sticky treat smeared across her mouth; wearing a thick gold grill across her teeth; under a thick black veil while wearing a sweatshirt with an American flag on the front; face hidden by a jewel-encrusted mask reminiscent of a Lady Gaga concert prop.

Not everyone was a fan of the highly stylized images, but CR Fashion Book editor (and former Vogue Paris editor-in-chief) Carine Roitfeld said the fashion world needed to be shaken up a bit.

“[People] like it or they don’t like it. People were very surprised,” she told the Huffington Post. “I think it’s good to have surprises in fashion because we always see the same things.”

Baby daddy Kanye West shared the above still photo from the shoot, showing Karl Lagerfeld behind the lens, writing, “Karl shooting my 2 girls.”

Tell us: Is Kim Kardashian’s photo shoot artsy or awful?