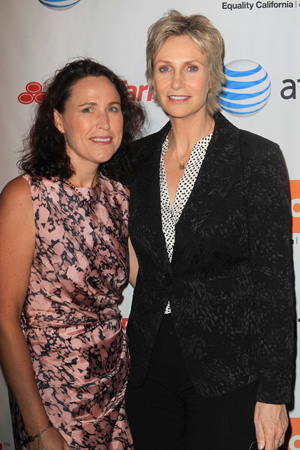 In July, Jane Lynch filed for divorce from her wife of nearly three years, Lara Embry. Lynch told the press the divorce would be amicable. Despite the lack of a prenuptial agreement, Lynch said she didn’t expect any major conflict over the couple’s finances.

But money has a tendency to change people and now Lynch and Embry are embroiled in a true Hollywood divorce that could easily cost Lynch millions.

Court records show Embry claims Lynch consistently makes about $230,000 per month, and thus can easily afford to meet her demand of her nearly $100,000 per monthly spousal support — Embry wants $93,809 to be exact.

TMZ says Embry told the court she spends about $40,000 per month on just clothing, entertainment, gifts and food.

In addition to the nearly six-figure spousal support, Embry also demands that Lynch hand over the deed to their multimillion-dollar home in Los Angeles. As a form of compromise, Embry said she would be willing to accept half of the profits from the sale of the couple’s house.

Lynch currently lets her ex-wife and stepdaughter live in the house. Lynch moved out over the summer.

Embry says she feels entitled to spousal support given the success of Lynch’s career during the past few years. Embry remarked in court that “[Jane’s] income, investments, and assets increased dramatically with her newfound acting success.”

So, just who is Embry? She’s actually a highly educated clinical psychiatrist. Embry is a graduate of Smith College, a prestigious liberal arts university in Massachusetts, who went on to complete her master’s and doctorate degrees at the University of Washington.

Before her marriage to Lynch, Embry practiced at the Carter Psychology Center in Sarasota, Florida.

Embry has two children, daughters Haden and Chase. At the time that she met Lynch, The New York Times noted she was going through a visitation battle to see Chase, who is adopted. In their wedding announcement in June 2010, Lynch said she was thrilled to become a parent to Embry’s two children.

However, since their divorce proceedings began this past summer, Lynch has not indicated that she will financially support Embry’s two children.