Vanessa Hudgens is working to shed her Disney-girl image by taking on more serious roles. But she never wants to forget how she got to where she is. 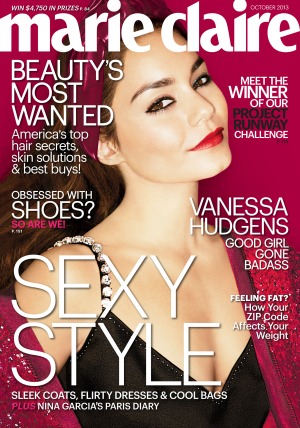 Vanessa Hudgens went from a struggling child-actress to a Disney darling, but now she is all grown up and taking on new, more adult roles.

Hudgens landed some small roles in Hollywood as a teen, but really hit it big when she scored the part of Gabriella in High School Musical in 2006. Like many actors who have dreams of stardom, the road to success wasn’t an easy one.

“Money was a big thing,” Hudgens told Marie Claire. “My parents drove me up to Los Angeles, which cost a lot because of gas, and took out loans so that we could move from location to location to be close to Los Angeles. The family definitely struggled. They were very supportive of me. They gave up a lot so that I could get to where I am.”

During that long trip to success, the 24-year-old learned to love herself, and she knows that has kept her sane in Hollywood.

“A sense of knowing I’m part of something bigger than myself has allowed me to enjoy life more,” Hudgens said. “And not worry about the little things. Like paparazzi.”

That self-assuredness has also helped Hudgens branch out in her career. She is becoming something of a fashion icon, and is taking roles she may not have taken as a teen.

“I am so comfortable with myself — honing in on what I love and what makes me powerful,” she explained. “Things I’ve been doing lately, I’m super-proud of. So I don’t really care if someone doesn’t like it, because I love it.”

Along the way, Hudgens made friends with another Disney actress, Selena Gomez. The two recently starred in Spring Breakers together, and Gomez explained to the magazine that Hudgens is one of the most real people she knows.

“She’s not jaded at all,” Gomez said. “The person you see and talk to is the same person I talk to.”

Hudgens revealed her life goals include “a vintage mustang, kids and an Oscar.” But for now, she is happy with where she is, and that is no accident.

“You have a choice whether you want to be happy or not. I choose to be happy,” she explained. “And it’s been working out pretty well.”

Hudgens’ next film, Machete Kills, is out in theaters Oct. 11. Her Marie Claire interview will hit newsstands Sept. 17.