Sandra Bullock and George Clooney have been friends for over 20 years. They’ve stayed close through fame, fortune, marriages and divorces. It’s no wonder Bullock’s son, Louis, has a soft spot for the actor. 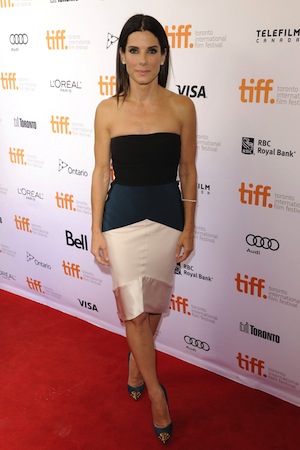 Sandra Bullock and George Clooney have a lot in common. They’re both Academy Award winners, they both star in the sci-fi film Gravity and they both love Bullock’s son, Louis. While supporting her latest movie, the actress revealed Louis and Clooney’s epic bromance.

According to US Weekly, Bullock’s son is crazy about his mom’s co-star. “My son thinks he’s a very cool dude. If there’s a choice between me [and] George and Alfonso [Cuaron, the director], my son will leave me to be with George and these guys. He’s a boy’s boy, so he has to go talk to the men.”

Can you blame Louis? The kid’s got good taste. Bullock is a working, single mom who realizes he needs that male-bonding. So she happily steps aside and allows him to get his testosterone on.

“The cute little anecdote is that he went to me and said, ‘Where’s George and Rande [Gerber]?”” she remembered. (Gerber, married to Cindy Crawford, is a close pal of Clooney’s.) “I said, ‘I don’t know!’ And he said, ‘I need them.’ So we went and found them, and they had man time. And I sort of stood off to the side and waited for them to finish. Then I was allowed to take him back.”

Aww! We need Clooney too Louis. In a perfect world, he and Bullock would grab her son, get married and ride off into the sunset. We doubt it will happen, but we can dream can’t we?