Recently engaged couple Jennifer Love Hewitt and Brian Hallisay got into a scuffle with photographer as they exited a restaurant. 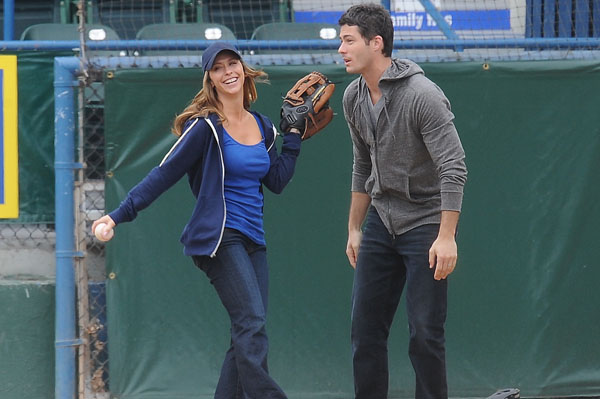 The Client List star Jennifer Love Hewitt and her co-star/fiancé, Brian Hallisay, got into a confrontation with a photographer Friday night as they left Toscana restaurant in Brentwood, California.

The couple was approached by a relentless paparazzo as they exited the Italian eatery. Hewitt and Hallisay asked him to stop and go away. However, the man did not relent and kept snapping pictures of the pair.

Getting increasingly angry, Hallisay got into a scuffle with the incessant picture-taker and allegedly got him in the face when the camera slammed into him during the struggle. The paparazzo claims that he got hit near his eye.

TMZ said that Hewitt felt “so bad” for the guy that she let him take more pictures to make it up to him before she left with Hallisay. But it didn’t end there, because the angry photographer decided to visit the police station a few hours later and file a battery report against the actor.

Sources in the know told TMZ that when the photog went into the station he did not show any signs of injury to his eye or anywhere else. They also claim an investigation into the matter is currently ongoing.

Hewitt and Hallisay are otherwise enjoying their lives together, expecting a baby and getting married soon. However, this isn’t the first time the pair has made negative headlines lately.

Just recently it was reported that Hewitt was causing friction on set with her Client List co-stars because of her lost interest in the show. Since becoming pregnant, the actress has gotten to the point where she doesn’t “care if it all went away.” This makes it hard on her fellow actors who have less financial security and are locked in by contracts, unable to get other jobs.

“The network has them on hold until mid-December,” a source told Celebuzz. “There is no information as to whether they will go forward with the show.”

Hewitt’s main concern now is her relationship with Hallisay and their future baby. She wants the show to take a turn and focus more on the family side of her character and not go into the edgier, more sexy direction the Lifetime Television Network is suggesting.