Prince Andrew was the victim of mistaken identity over the weekend when he was accosted by police on palace grounds as an intruder. 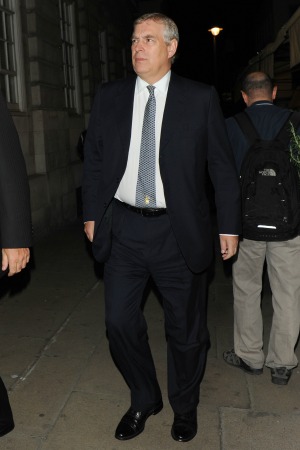 Prince Andrew had a bit of excitement last week when he was accosted by cops in his own family garden.

The younger brother of Prince Charles was taking a walk in a private area of the grounds of Buckingham Palace Wednesday when police, mistaking him for an intruder, dramatically yelled for him to “put your hands up and get on the ground” while drawing their weapons, a source told the Express.

Andrew, who had just returned from a two-week holiday in Spain with his ex-wife Sarah, Duchess of York and their daughters, the Princesses Beatrice and Eugenie, was understandably shocked and appalled by the turn of events, which came on the heels of a real intruder being captured in the palace two days prior.

“Everyone is talking about these two incidents and can’t quite believe what has happened,” the royal insider told the Express.

“The fact that this guy was able to wander off unchallenged and not be spotted by anyone is bad enough. But then to mistake the Duke for another intruder is almost incomprehensible. There is a high turnover of the police on duty at the Palace, but you’d think anyone would know what Prince Andrew looks like.”

“It’s fair to say that to describe the Duke as unhappy and the two officers as highly embarrassed is the biggest understatement of the century.”

The London Metropolitan Police confirmed the incident took place but denied any weapons were involved.

“On Wednesday, 4 September at approximately 1800hrs two uniformed officers approached a man in the gardens of Buckingham Palace to verify his identity,” a police spokesperson said in a statement. “The man was satisfactorily identified” and “no weapons were drawn and no force was used.”

“We can confirm that the man spoken to by officers was The Duke of York,” the statement continued. “We are making this public with His Royal Highness’s permission. We are grateful to The Duke for his understanding and have apologized for any inconvenience caused.”

Prince Andrew issued a statement of his own, making light of the situation.

“The police have a difficult job to do balancing security for the Royal Family and deterring intruders, and sometimes they get it wrong,” he said. “I am grateful for their apology and look forward to a safe walk in the garden in the future.”

But privately, the prince is said to be much angrier about the incident than he’s letting on.

“From what we’ve all heard the Duke was absolutely livid and tore them off a strip,” the source told the Express. “Whether they will be disciplined is another matter, but it can’t have done their careers much good.”

“The general feeling is that the police are desperate to hush the whole thing up. It’s not been a good week for them.”