Bruno Mars has come along way since his performances as a 4-year-old Elvis Presley impersonator and his rise to superstardom has just grown another notch. 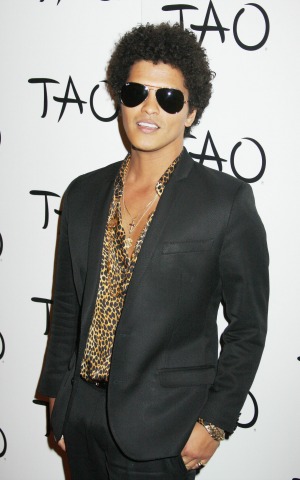 The Super Bowl hype has started early this year now that it has been confirmed that the musical act for the NFL Super Bowl XVLIII is 14-time Grammy Award nominee and winner Bruno Mars!

The Super Bowl will be held at the MetLife Stadium in East Rutherford, New Jersey, on Feb. 2, 2014, and the Treasure hit-maker has nabbed the lead halftime spot.

The announcement was made by Fox NFL Sunday, marking it as the earliest reveal ever of a Super Bowl Halftime Show performer.

Mars is certainly excited about the news, as he announced on Twitter on Sunday, “WE’RE GOING TO THE SUPER BOWL!!!!!!! #PepsiSBHalftime”

There was even a tweet from Pepsi, “Excited to have you in #PepsiSBHalftime Mr. @BrunoMars. We KNOW you’re #FanEnough! The countdown to Feb 2 is on. http://www.nfl.com/pepsisbhalftime.”

What an honor for the Locked Out of Heaven singer, whose career is certainly taking him to new heights. The event is watched by more than 114 million viewers every year!

The Super Bowl performances usually feature several guests, but for now it is unconfirmed who will be joining Mars on stage, although he does have some big shoes to fill.

Mars, whose real name is Peter Gene Hernandez, follows in the footsteps of this year’s performer, Beyoncé and her former Destiny’s Child band members Kelly Rowland and Michelle Williams.

However, the performer to currently attract the most views was Madonna, whose controversial performance — because guest star M.I.A. stuck up her middle finger on live television — drew more than 114 million viewers, making it the most-watched event in U.S. television history.

To compliment the news, Mars has released a one-minute trailer about his headline gig.

The video posted to his YouTube channel depicts the singer’s rise to fame, from when he started as a 4-year-old child doing Elvis Presley impersonations to his Unorthodox Jukebox performance with his Hooligans band. The feature wraps up with the artwork for the 2014 Pepsi Halftime Show.