This is also known as 20 Reasons we love Aaron Sorkin. 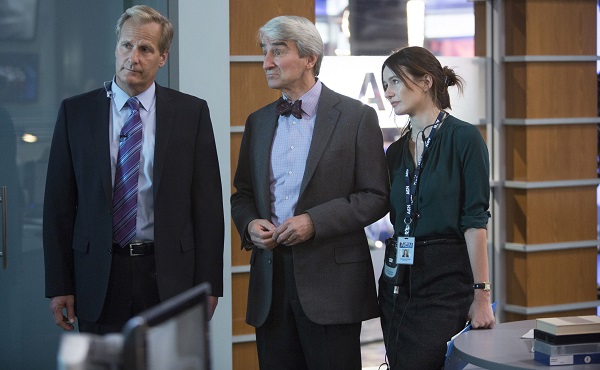 The first part of The Newsroom Season 2 finale, “Election Night, Part 1” was brilliant. Since the entire world already knows how election night will end, let’s focus on something else: The amazing dialogue. Take a look at our favorite interactions from the episode. (And, yes, the first several interactions take place within the first two minutes of the show.)

“You aired a bad story.”
“It was a great story.”
“If only it had been true.”
“Well, I’m sorry we didn’t meet your East Coast intellectual standards.”
-Will McAvoy (Jeff Daniels) & Rebecca (The attorney)

“We aired a doctored tape in support of a fake report. The guy who doctored the tape is suing us. The woman who has always wanted to fire us won’t let us resign. The unhappiest guy in the building is in charge of morale. We have gone to the zoo!”
-Charlie

“True story.”
“Yeah!”
“Which is more than we can say for the story.”
“That’s right.”
“But on the bright side…”
“There is no bright side, Father Flanagan. Don’t finish that sentence.”
“I wouldn’t be able to anyway.”
-Will and Charlie

“Reese is having a viewing party upstairs?”
“Yeeeeah. And look at me.”
“Why am I looking at you?”
“Because I’m dressed for the party? I look hot. Liquid sex.”
“What’re you saying?”
-Charlie and Rebecca

(Will lights a cigarette.)
“These things. Why don’t you just set yourself on fire and stow the cigarette?”
“One’s enjoyable to me and the other would cause a lot of pain. It’s not even a choice.”
(Charlie bums the cigarette from Will and leaves.)
-Charlie and Will

“Talk to me, too, sister!”
“Be less desperate for female friends!”
-Sloan (Olivia Munn) and Elliot

“Didn’t you used to take showers with his chief of staff?”
“John Webb?”
“Yeah.”
“We played tennis.”
“And then took showers together?”
“I’m gonna make the call. But they’re individual showers.”
“Cool. For privacy?”
“When you cut your hair, did you want to look like Joey Heatherton and something went terribly wrong?”
-Maggie and Don

“No news producer in America has had sleep.”
“They’ve had some.”
“Forget about that.”
“You look like you were grown in an environment where it’s dark and damp.”
-Mack and Will

“Listen up! We found these pictures today. This is China. People have their picture taken pretending to vote. In India, they’re waving flags and having viewing parties to watch the coverage. In South Korea, they’re watching an election map, a mock ballot box in Senegal. And that’s our ambassador in Hungary having a pizza party. Our elections are the envy of the world.”
-Charlie

Up next: More moments from The Newsroom “Election Night, Part 1” >>