Carrie Underwood is a total pro. Even though she fell in concert on Thursday night, she kept the show going and didn’t even miss a beat. 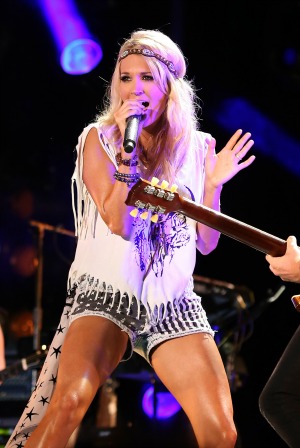 The old showbiz saying goes, “The show must go on.” That’s exactly what Carrie Underwood did when a wardrobe malfunction wiped the singer out onstage at her Corpus Christi, Texas concert on Thursday night.

Naturally, the entire event was caught on Instagram video. The American Idol winner was in the middle of a song when her white top with a longer hem in the back got caught in her black 5-inch-heeled boots.

Carrie Underwood gets her own nail polish line >>

The singer went down for the count, but didn’t even miss a note. She held the microphone in one hand while singing and disengaged her shirt from the heel with her other hand. It was quite the impressive performance.

I love you Carrie! You are perfection, even perfect people fall! I'm so glad you laughed about it and moved on! I'm sorry and I hope you feel better! ❤😘 @carrieunderwood #carrieunderwood

Once her wardrobe was straightened out, Underwood gracefully got back on her feet and didn’t even acknowledge the misstep.

She addressed the fall later that evening by making fun of herself on Twitter.

Hey, remember that time in Corpus Christi when that girl busted her butt on stage?! Hilarious! Oh wait, that was me! #5inchheels #klutz

However, after writing about her painful toes from her fall, she did see a doctor. The mishap resulted in a sprained foot, but fortunately, there were no broken bones. The 30-year-old Grammy winner even shared her new accessory with her followers.

Good news, it's not broken…AND I got some new footwear! pic.twitter.com/chJ2zBLDyX

Underwood is still scheduled to perform tonight in Hidalgo, Texas, and on NBC’s Sunday Night Football this weekend to sing the show’s theme song.