Move over, Robin Thicke — two Nordic brothers who go by Ylvis have recorded the true song of the summer, “The Fox.” 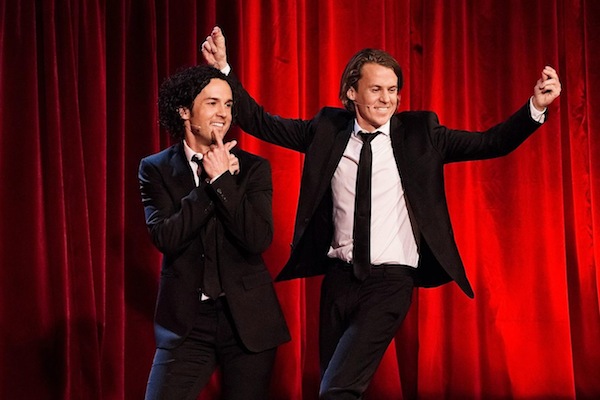 You know how it is. You’re reading a story to your son or daughter or niece or whichever little child needs a story and you get to the animal sounds part.

So you put your pride and all semblance of decorum away and proceed to make all sorts of animal sounds — elephants, cows, horses, sheep.

And then you get to the fox.

Michael J. Fox returns to TV in the fall >>

Enter brothers Bård and Vegard Ylvisåker, who perform as Ylvis. The hosts of the Nordic variety show I kveld med YLVIS (roughly translated as Tonight With Ylvis) on TV Norge have clearly been in this situation.

So what are Nordic TV host brothers to do but write what online gossip site Gawker calls the real song of the summer? And truthfully, I’ll watch this over and over if I don’t have to hear “Blurred Lines” ever again.

Their song “The Fox” is part boy band, part EDM and all awesome!

And it answers the age-old question, “What does the fox say?”

I never tell people that they have to watch a video. But you have to watch this video. I mean it. Just click play. You can thank me later.

And since summer is almost over, I am deeming “The Fox” the song of the fall.

What do you think of “The Fox”? Is it the newly crowned song of the fall? Let us know in the comments!