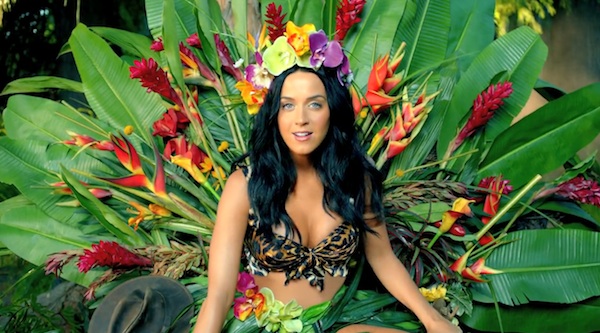 Now if we were all to bet even a week ago what Katy Perry‘s video would look like for “Roar,” anyone who has been paying attention would have said that it would be a boxing theme like her closing VMAs performance this year.

And then Perry would fight her way through a Brand look-alike before taking on a John Mayer look-alike. She would get bruised and bloodied along the way, but ultimately she fights herself and wins.

And scene. Pick up your 2014 VMAs Best Video Moonman on your way out.

Did Katy Perry really need a lyric video before the release of her official video? >>

But no. Katy had to get all literal on us.

Perry’s official video for “Roar” finds the beauty stranded in a remote jungle with her vain, selfie-taking boyfriend who immediately gets eaten by a tiger, thus leaving poor defenseless Perry to defend for herself.

Perry kneels by a lake and faster than you can say “Expecto Patronum,” all the fireflies form into her animal spirit — wait for it — a tiger… yup, just like the song.

After that, Perry adjusts to jungle life — spearing bananas with her stiletto, taking a shower via elephant and looking generally gorgeous in her cheetah print bra and banana leaf skirt.

Now then, let’s pause a minute here. Perry has clearly never been in a jungle-type setting because let me tell you that a cheetah print bra and banana leaf skirt are not what you want to be wearing in the jungle. Plus, her skin would never look that good. The parts that hadn’t been chewed up by bugs and mosquitos would be sweaty and gross. Instead, this video is as beautiful as we have seen her in a while.

But jungle rules do not apply to Perry.

Katy Perry reveals the recipe to her glowing skin >>

Her tiger Patronus tames the boyfriend-eating lion with — wait for it again — his roar, and Perry lives happily ever after with her jungle friends.

It’s a cute video, but that’s about it. I was waiting for a more grown-up video from Perry. She’s been married and divorced. She’s faced more adversity. Let’s stop living under the assumption that the world is a teenage dream full of soundstage jungles and cotton candy bras.

Perry began to take us there with her very unglamorous VMAs performance, but this video, while colorful and fun to watch, seems a step back for her and turns what could have been a very empowering artist statement into a fluff piece.

“Roar” is the first single Perry has released off of her upcoming album Prism due out Oct. 22.

So what do you think of Katy Perry’s video? Does it roar, or is it more like a meow? Let us know in the comments below.