In this episode of Burn Notice, called “Sea Change,” Michael makes a decision that changes everything, causing his family to fight back the only way that they know how. But who will be the victim in the end? 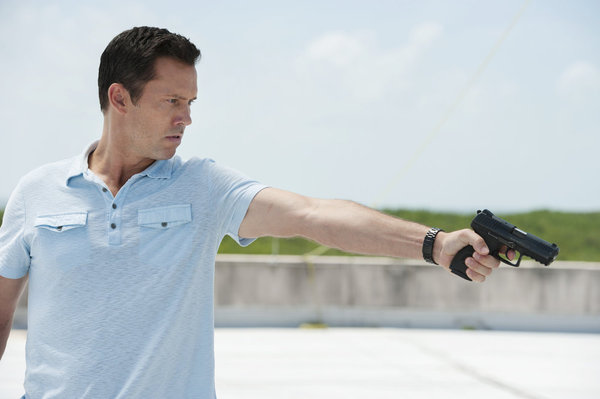 If you read my review of the last episode, then you know that I thought that one was tense enough to require a cocktail afterward. I think I may need to have a couple after this episode and I am a little afraid to think about what I will be like after next week’s finale.

As Michael (Jeffrey Donovan) has been going through his journey this season, I’ve watched in horror as he seemingly went farther and farther down this very dark path. In this episode, things got even worse when Michael shockingly decided to accept James’ (John Pyper-Ferguson) deal and lie to the CIA. Michael returned to Langley, put on a suit and told everyone there exactly what James had coached him to say and as he did it, I kept waiting to find out that it was all some big trick. Even after Michael lied to his friends and ordered them all to stay away, even after Sam (Bruce Campbell) called him on the phone and he lied to say that he wasn’t meeting James — through all of it I thought maybe, just maybe, Michael was planning the biggest double-cross ever.

Sam seemed to echo my thoughts on the show, almost as if everything I was thinking, he was thinking, too: Michael can’t be bad. Michael isn’t a traitor. Michael would never lie to his friends. Michael would never, ever join forces with a guy like James. So it made sense that when Sam’s heart was broken, mine was as well. When Michael caught on to the fact that Sam and the rest of the team were trying to capture him and get him away from James, he screamed at Sam and let loose with the truth — James had offered him the job of running the terrorist group and Michael was considering it. Not just considering it, but happily thinking about all the things that he would be able to do once he was in charge.

The fight that followed between Sam and Michael I felt was long overdue. All along, Sam has been a stalwart supporter of Michael, but finally he decided that enough was enough. I knew that Michael would win the battle as he seemed to be too focused and I think Sam would never have had the heart to truly hurt his best friend.

Once Sam failed to bring his buddy back, that left Fi (Gabrielle Anwar) to go after Michael and try to talk him down. With the CIA closing in and James ready to be caught so that Michael could be the hero and run the group with his CIA “cover” intact, what else could Fi do but stand her ground? I truly believed her when she told Michael that he should go ahead and shoot her because if he felt he needed to do it for his new job, then the man she loved was gone already.

One glimmer of hope I got was the fact that Michael’s whole world seemed to collapse when Fi made that decision. He was genuinely confused about what to do and maybe then he’d finally realized what his choice meant and how he would have to hurt people to do what James had done. The only question now is: Did he realize it in time to save Fi? Or will next week’s season finale be about Fi’s death snapping Michael out of his (for lack of a better word) trance and getting back to being the good guy that I know he can be?

Michael admitting that one part of him did care for Sonya.

Michael telling James exactly what the CIA wanted and what it meant to him and his family. Can’t say I was expecting that.

“You made me believe there is something worth fighting for, something to believe in.”
“I believe in you, Michael Westen.”

Strong actually sticking up for Michael.

Michael speaking up and asking the Director when was the last time he was out in the field. That. Was. Awesome.

Fi showing Michael his gun and bullets and letting him know that was all he was going to have left when everything was over.

Finding out that Fi put a tracker in Michael’s gun. That woman is brilliant.

Sam defending Michael to the bitter end, even after he saw that his best buddy lied to him.

Sam actually admitting to Jesse (and himself) that Michael had switched sides.

Maddie begging Fi to tell her what to do.

James asking Michael and Sonya to run the operation for him. Wow.

“I’d spend hours thinking about the moment I could put a bullet in his brain.”
“That doesn’t really help me.”

Maddie taking one last look at her house. Even after she talked about the bad memories there, it still broke my heart.

Sam reminding Michael that when Fi got “that way,” things tended to go “boom.” 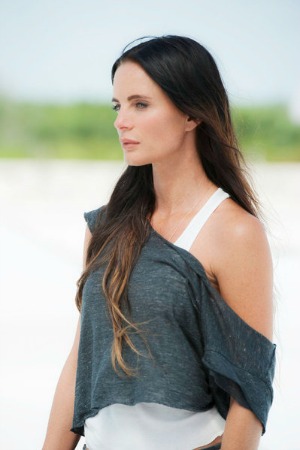 Oh yes, gotta love Michael peeling out in the Charger.

Michael picking up that something was wrong. Oh, boy.

Michael grabbing the wheel from Sam. I totally thought they were going off the bridge.

The “who’s lying to whom?” argument on the bridge. I loved so much that it happened in the rain. That was perfect.

The look on Michael’s face when Sam brought up Nate.

Sam asking what was going to happen when someone got in Michael’s way.

The fight. Seriously, do I need to say anymore? When they went into the water, I totally lost my s***.

“If we don’t stop him now, there won’t be a Michael left to save!”

Sam talking about what he saw in Michael’s eyes.

Maddie begging them to not give up on Michael. Dying. I was dying.

Fi running onto that rooftop.

Admiring the beauty of the shot as Michael and Fi talked on the roof. The clouds sliding by behind them were beyond gorgeous. Amazing shot.

“Is it too late for the Michael Westen I fell in love with?”

“That someone is me.”

What did you think of the penultimate episode of Burn Notice? Who do you think was shot when the screen went blank?