Just kidding, Lamar Odom doesn’t want to get help for his addictions… yet. The former Los Angeles Clippers pro reportedly left rehab after one day. 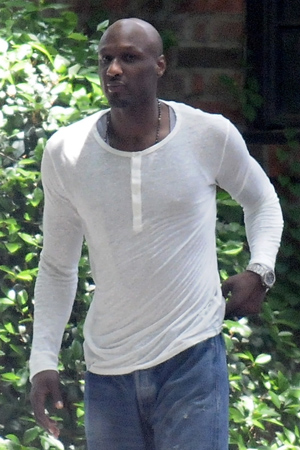 Khloé Kardashian reportedly gave Lamar Odom an ultimatum: Get help for your addiction to crack cocaine, or get out. It seemed like he chose the former on Wednesday when he checked into a Los Angeles-area rehab.

Apparently it wasn’t enough to keep him there, though. Sources told People that the former Los Angeles Clippers player checked out of rehab just 24 hours after he checked in. He reportedly left the premises with an assistant.

And Kardashian is totally in the dark about everything, according to TMZ.

“Lamar has gone off the radar with the Kardashian family for the last few days. Khloé — who has made it clear she will end the marriage if he doesn’t get help — has heard nothing from him,” the website reported on Thursday afternoon.

It sounds like no one has heard from him lately.

“It’s unfortunate,” Lakers player Jordan Farmar told ESPN. “A couple of us have reached out to him and haven’t heard back.”

He has to be with someone: The baller automatically lost his driver’s license last weekend after refusing a chemical test after his DUI arrest. It’s possible he’s surrounding himself with a group of “yes” men who will enable his addiction, like the dealer who reportedly bailed him out of jail. One of his dealers — who refused to be named — told RadarOnline that he spends a huge amount of cash on drugs on a regular basis.

“[Lamar has a] huge problem and he has a very addictive personality. It is becoming worse as you can see,” the dealer told Radar. “He likes to party, he’s a pretty nice guy to be honest with you, but he’s becoming… his problem seems to be becoming a bigger problem. In my experience, he literally likes cocaine. He is a cocaine guy. He likes to smoke it.”

The dealer alleged that Odom has spent $50,000 on drugs “over the time I known him.”

As for when he smoked it? The dealer alleged that Odom freebased cocaine before a Clippers vs. New York Knicks game at Madison Square Garden on Feb. 10.

“I know it for a fact because I sold him the stuff and saw him smoke it, he spent about 16 grand. Quantity-wise, it was a little under half a kilo,” the dealer added.

His friends — and family — are still pulling for him, no matter how serious the situation seems right now.

“As a teammate, as a friend, whatever the case is, he’s always been great to me,” former teammate and friend Shannon Brown told ESPN. “He’s one of those guys who wants to see other guys succeed, and he’ll do whatever it takes to help them, whether it’s giving them some words of encouragement or passing them the ball if they’re open. Little stuff like that, it makes a huge difference.”