This gorgeous Glee actress stars alongside Robert De Niro, Michelle Pfeiffer and Tommy Lee Jones in the new film The Family. This action-comedy flick tells the off-beat story of a mob family who gets relocated to France by the witness protection program. Read what Dianna has to say about stunts, love and working with Oscar winners.

Related story Have you seen Dianna Agron topless yet? 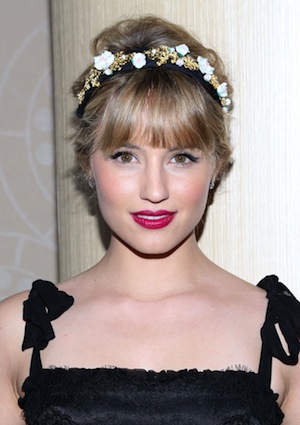 Dianna Agron plays the character Belle Blake, the daughter of crime boss Fred Blake (Robert De Niro) and his mob wife Maggie (Michelle Pfeiffer). Agron says she was drawn to the charcter Belle because, ?She’s a dreamer who doesn’t want to be involved in the family business or anything of that nature, but when prompted, she goes there.”

Agron also admits to being a huge fan of both De Niro and Pfeiffer, claiming, “I’ve seen almost everything the two of them have done, so to be able to work alongside them, it was an absolute dream.”

When asked if she learned any acting tips from Pfeiffer, the Glee-ster said, “Just observing Michelle on set was some of the best advice anyone could get. Just to watch her work and observe the choices she made.”

Her character, Belle, appears to be pretty tough, despite her good-girl exterior. Does Agron also have a secret bada** side to her in real life? “Fire and inner strength are something I possess, but stunt training really helped.” She went on to compare stunts to dancing. “Stunt training to me, feels like a dance class. It is choreography and I’ve been dancing since I was three, so it makes a lot of sense to me.” She says she surprised both her stunt coordinator and herself by her ability to kick-butt.

Agron also says that people often misjudge her, saying, “Being a former ballerina and wearing dresses and having a very girly side to me, people assume that there is no duality.” But she admits that it is easy to judge a book by its cover.

In The Family, Belle is experiencing love for the first time. We asked if Agron was as naive as Belle the first time she was in love. “Most girls are that hopeful, to be honest. Everybody thinks the first time is going to be magic and it might not be. I know that it wasn’t really in my case. The good news is that just because you don’t marry your high school love, there is love out there for you.” We like your optimism!

Though memorable, her first smooch wasn’t terribly romantic. “My first kiss was at 13 or 14, at my friend’s Valentine’s Day party where at one point they turned off the lights and the instructions were to kiss the person you had a crush on. It was the most awkward thing I’ve ever experienced in my entire life and I can picture it like it was yesterday.” We can relate.

Most memorable movie kisses of summer 2013 >>

So what does this busy gal look for in men, besides not being an awkward kisser? “I think you have to be a good person and be secure and happy in yourself.” Good advice for all, thanks.

The Family opens in theaters today.