Pippa Middleton is deliriously in love with her banker beau, Nico Jackson. There are quite a few rumors about an impending engagement, but no firm news as of yet. Will they end up taking the world by storm as the new “it” couple? Yes, if their whirlwind relationship is any indication. 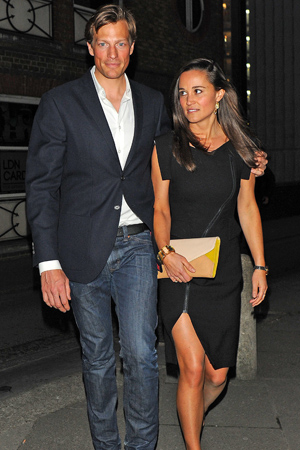 All eyes were on a newly pregnant Kate Middleton when she vacationed with Prince William and the Middleton family in Mustique, but Pippa managed to steal the show when she was spotted hand-in-hand with Jackson. It was big news, especially since she hadn’t been in a serious relationship with anyone since splitting from ex-cricket star Alex Loudon in 2012.

“We’re very pleased,” Ulrike Jackson told the U.K. Daily Mail. “They are happy, and that is all that matters. As long as my children are happy, then I am happy. Yes, we have met [Pippa] and I have to say she is absolutely charming, but I really cannot say any more.”

The family vacation brought the pair closer together: She reportedly moved out of the home she shared with brother James Middleton and into the 35-year-old stockbroker’s swanky Kensington flat. Things were getting serious… and Jackson was already thinking babies!

“Nico really got on with the family during their trip to Mustique — especially Kate,” a source told the U.K. tabloid Now. “They bonded over her baby and Nico told her how he feels about wanting a big family. He said he wanted to be a dad sooner rather than later. He was genuinely interested in Kate‘s well-being and very supportive about her pregnancy.”

A “smitten” Pippa was happy that everyone got along.

“She was really delighted at how close everyone became during such a short space of time,” the source continued.

Rumors emerged midmonth that Jackson was planning to pop the question to Middleton, but he didn’t want to take away from Prince George’s birth. However, it was definitely a go, according to pals.

“An engagement is definitely on the cards,” a source told the Daily Mail. “The last time Nico spoke about Pippa to his friends back home in Folkestone, he was totally buzzing about her. He is in his element right now. He has never been happier and this is really what he wants.”

Even more rumors emerged that Jackson proposed shortly before Wimbledon — and, of course, she said yes. Sources told U.K. tabloids that they planned to announce their engagement during Pippa’s birthday party on Sept. 6.

“Pippa loved seeing Kate go down the aisle and now it is her turn for a fairy tale wedding,” adding that they’re planning for a spring 2014 wedding.

“She couldn’t be more sure that Nico is the right man for her. They are such a good fit for each other and their families get on really well. Everyone is so happy for Pippa.”

Other sources are denying the engagement, but it seems like it’s bound to happen sooner or later!

Do you think Pippa Middleton and Nico Jackson will go the distance? Sound off below!