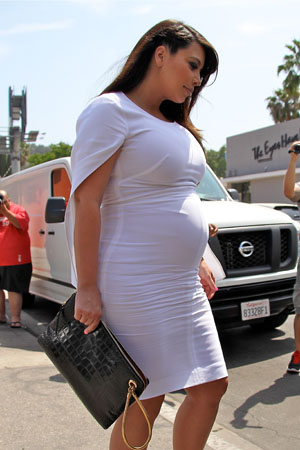 Just weeks after her daughter, North West, was born, Kim Kardashian shocked fans with a dramatic new makeover, stepping out with blond hair.

Having already shed some of the baby weight, Kardashian stunned when she sported the new hair color at a friend’s barbecue over the weekend, E! News reported. Toting the baby in a car seat, the reality starlet was also accompanied by sister Kourtney and her two kids, Mason and Penelope.

While the Keeping Up With the Kardashians star lightened her hair last summer as well, it was not as blond as it is this time. However, the socialite has had blond hair several times in the past.

It may have come as a surprise to some, but Kardashian has actually been hinting the change for a while now, posting photos on Instagram with captions such as: “missing my blonde.” For her new shade, the new mom turned to stylist George Papanikolas of Joico at the Andy Lecompte Salon, who said Kardashian “was so pleased and absolutely loved it!”

Since the birth of North, Kardashian and her baby’s father, Kanye West, haven’t been seen much in public. The pair have been keeping out of the spotlight, only coming out for baby-doctor appointments.

Apparently, Kardashian had been overly concerned over her heavier appearance from the pregnancy and is said to be working hard to shed the extra pounds. People magazine revealed that she has already lost a lot of the weight, feels great and “is looking forward to getting back in shape.”

Living at her mom’s house, Kardashian has access to a private chef who cooks light and healthy meals for her, a source for People said.

“She’s happy with the way she looks,” the source added, “but she knows she still has a way to go to get her pre-baby body totally back.”

Meanwhile, Kardashian is enjoying her time with her new baby and “settling into a routine with her daughter.”