Lamar Odom didn’t call his wife Khloé Kardashian to bail him out of jail after getting a DUI earlier this week, instead turning to a far more unsavory “friend.” 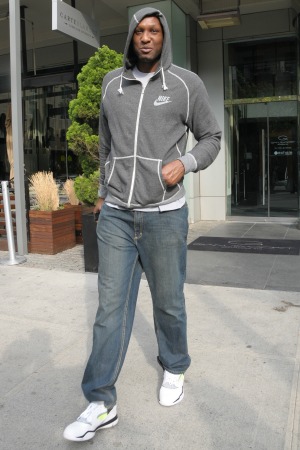 Lamar Odom is shutting wife Khloé Kardashian out of his legal woes and didn’t even call her after his arrest on DUI charges.

A source close to the situation said that not only did Odom not call Kardashian to bail him out of jail, she didn’t even know about the arrest until she read it in the media the next day!

In fact, the insider told RadarOnline that Odom’s own drug dealer “posted $15,000 bail to get him out of jail last Friday morning, after being arrested for a DUI.”

“The sad thing is that Lamar didn’t call Khloé to bail him out. Instead, Lamar opted to call his drug dealer. Khloé found about his arrest by reading about it in the press, and was stunned.”

Odom has given in to one Kardashian requirement: his lawyer, Robert Shapiro, was reportedly hired at the insistence of mother-in-law Kris Jenner. Shapiro, who helmed the O.J. Simpson defense team alongside Jenner’s ex Robert Kardashian and suffered the loss of his son in a drug-related death, now refuses to take on any substance abuse-related cases unless the accused demonstrates a willingness to overcome their demons.

But did Khloé Kardashian know? Insiders say no. According to TMZ, Khloé kicked Odom out of the house last Saturday with an ultimatum: Get help or get gone. She reportedly hasn’t heard from him since.

She’s not giving up on her husband, though.

“Khloé loves Lamar to her core, and would do anything for him, anything, even after all of this. There have been nights when he hasn’t come home, that she has expected a phone call saying he is dead,” the source told RadarOnline. “She will support him through this, 1000 percent, no matter what her family or anyone else says. Don’t screw with someone that Khloé loves, period.”