Ashton Kutcher and Mila Kunis have been inseparable for the last year, and now the young couple is showing signs they may be ready for marriage. 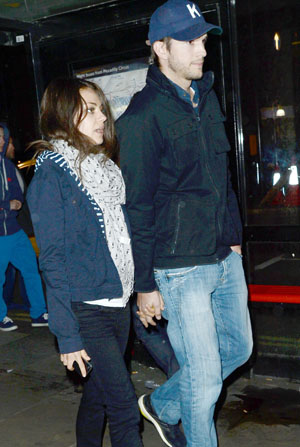 One of Hollywood’s most endearing couples, Ashton Kutcher and Mila Kunis, have been by each other’s side for months, whether traveling the world or taking casual strolls around New York City’s Central Park. And now, the adorable pair are starting rumors that they may be engaged.

Spotted around Los Angeles while carrying a bundle of yellow flowers, Kunis was also sporting a gold band on her ring finger, People magazine reported. Sources have told the magazine that Kutcher may be getting ready to propose, even though no official announcement has been made yet.

One of the insiders said that “he knows what they have is amazing and special… he’s been thinking about proposing for a long time.” Apparently, Kutcher considered asking Kunis the big question around her 30th birthday which was on Aug. 14.

“They are clearly very much in love, in tune with each other and so comfortable.” Another entertainment source told People, “In some ways, it’s like they’re married already.”

However, since Kutcher is still legally married to Demi Moore, he will have to wait to tie the knot with Kunis. “He really wants to marry her and is so annoyed that there is still the hold-up with the divorce,” the first insider added.

Unfortunately, a marriage ceremony for the former That ’70s Show costars won’t take place for a while due to Moore’s reluctance to sign the divorce papers.

“Demi felt like she had ben wronged. She’s the one who was forced to end it, ” another People-insider revealed earlier this year when Moore did not agree to Kutcher’s lawyers’ terms, “She’s making a point.”

This isn’t the first time that Kutcher and Kunis have incited marriage rumors. VH1’s The Gossip Table claimed back in June that a reliable source told them the couple had been talking marriage.