Simon Cowell and his girlfriend Lauren Silverman are reveling in the news that they will be having a baby boy. 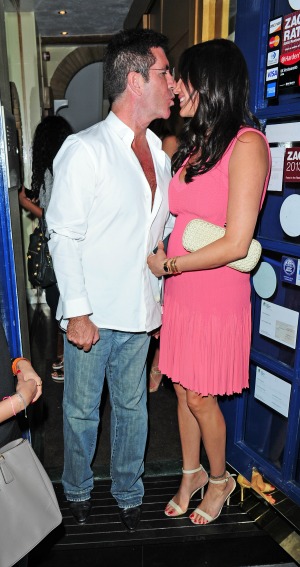 Simon Cowell and his baby mama Lauren Silverman may have caused a scandal when the news first broke that she was pregnant with the media mogul’s baby.

The reason for the scandal was that Silverman was in fact the wife of one of Cowell’s best friends.

However, her divorce is now finalized, and all parties involved in the love triangle appear to have moved on to better things.

Cowell and his socialite girlfriend are reportedly thrilled that they will be welcoming a little baby into the world in February, and that baby will be a boy!

A source close to the couple told the New York Daily News’ Confidential, “He is over the moon to be having a son.”

The couple got a glimpse of the sonogram, which showed their baby boy, and Cowell gushed to Us Weekly about the event, saying, “You literally see this thing which is now alive moving around.”

“I feel very paternal right now. So I am very happy.”

This baby will be Silverman’s second child — as she has a 7-year-old son Adam with her estranged ex-husband — but it will be 53-year-old Cowell’s first child.

Even though the The X-Factor entrepreneur cannot wait to be a father, he has admitted he’s “not great” with babies, which will be something that he improves upon in the next five months!

During an interview with British breakfast radio show Magic 105.4 FM, Cowell revealed, “I do like kids, I’m not sure I can deal with the whole baby thing. I’m not great with babies, but I’m good with kids, you know once they can talk to you and you can talk to them, I think it’ll be fantastic!”

The news that Cowell would be a father had initially come as a shock to him, but now it seems that he has embraced the idea of fatherhood.

Cowell told Magic 105.4 FM, “It was a surprise initially… I got a phone call with the news. Some of the circumstances around this were very uncomfortable, to say the least, you know… but it happened and she’s an incredible girl.”

“Once I got used to the idea that I was going to be a dad, then I was really happy, really happy. So, I’m really looking forward to it… It was quite dramatic, but you have to put things into perspective, it happened and I think I’ve dealt with it well. Overall, I’m probably happier now that I’ve ever been.”

Regardless of the situation, at least something good, a baby boy, is coming from it all!

Congratulations to Cowell, the soon to be first-time parent.