Chaz Bono is winning his battle with the bulge! The former Dancing With the Stars competitor showed off his svelte body this week. 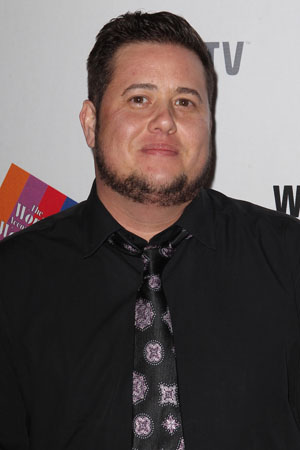 Former Dancing With the Stars competitor Chaz Bono is making good on his promise to drop 80 pounds, judging from a photo of the reality star taken earlier this week.

Cher’s eldest son made the promise last year after his stint on the popular ABC dancing competition. He kicked off the plan with a strict diet comprised primarily of protein, vegetables and fruit — and the weight quickly fell off.

“It hasn’t been that long, but when you’re a guy and you’ve got a lot of weight to lose, the initial stuff comes off pretty easily,” Bono said.

He stuck with it and later boasted about his accomplishment to People.

“[I have no cravings] at all anymore,” he told the magazine in May. “I really feel very satisfied and comfortable with the way I eat now, which is amazing and for me, kind of a miracle. I never thought I’d be that kind of a person.”

Chris Pratt shows off his seriously sexy body on Instagram >>

“Physically, my body feels just so much better,” he added. “I’m in a lot less discomfort when I exercise and am doing physical stuff. All of my numbers are all normal now, which is great — my blood pressure, my cholesterol. I just have a lot more confidence, and that feels really cool. I really like what I see in the mirror.”

Will he stop at 80 pounds? He’s planning on letting his body decide.

“To me, it was never really about a number,” Bono added. “It was just about getting healthy and feeling and looking better. So I’m just kind of letting my body dictate.”

And that body is definitely inspiring others. Keep it up, Chaz!