It’s the summer of love in Hollywood! Scarlett Johansson is the latest celeb to get engaged after her boyfriend puts a ring on it. 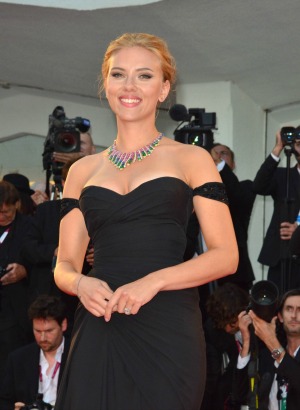 Another Hollywood celebrity is walking down the aisle. Scarlett Johansson is the latest star to get engaged this summer.

The 28-year-old star is engaged to her boyfriend of less than a year, Romain Dauriac. Dauriac, the former editor of the French urban art magazine, Clark, was introduced to the actress through a mutual friend. They began dating in November shortly after her fall breakup with advertising executive Nate Taylor.

Their attraction may have been sealed through their love of ink. It was famed French tattoo artist Fuzi Uvtpk who brought the couple together. He has also worked on several of their tattoos.

The proposal didn’t happen over the Labor Day weekend like it did for Katie Couric and Lance Bass. It happened about a month ago.

The Hitchcock star was spotted wearing her engagement ring, a vintage Art Deco piece, at the Venice International Film Festival earlier this week. She’s currently promoting the sci-fi film Under the Skin.

Scarlett Johansson & other celebs who are twins >>

The press has been hot on the engagement trail with Johansson over the last few months. A diamond and ruby ring she wore on arrival at Los Angeles International Airport in July was dismissed as “simply a piece of jewelry” by her reps.

Johansson was previously married to actor Ryan Reynolds. They divorced in 2011. The Green Lantern star is now married to actress Blake Lively.