Alison Pill joined the club of many celebrities who have accidentally tweeted naked photos to the world. A year later, the actress finally wants to talk about it. 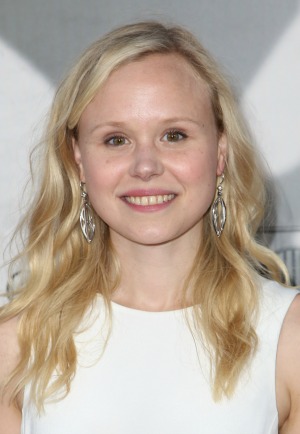 Alison Pill broke the cardinal rule of social media last year when she accidentally tweeted a topless photo of herself. The Newsroom actress finally came clean about what led to the snafu, to — who else? — Conan O’Brien.

“It’s a fascinating story involving not knowing that my new Blackberry had a touch screen and responding to somebody on Twitter like, oh, yeah, New York was great, it’s 9:30 on a Wednesday,” she explained. “Apropos of nothing, here are my boobs!”

Pill explained how she had been away from her fiancé-at-the-time, Jay Baruchel, and the couple kept their relationship alive by sending the photos to each other. To this day, Pill is still very embarrassed about the incident.

“So hideously embarrassing that for about three months after it happened, any time I met a new person I was just like, ‘Nice to meet you have you seen my boobs?'”

The Newsroom cast tells us their favorite lines and moments >>

O’Brien attempted to make Pill feel better by explaining that everyone takes naked pictures these days, and no one is safe from them being leaked.

“I also think it’s becoming so common, I mean, I don’t know, I think the — everyone running for president in 10 years, there’s going to be naked photographs,” he explained.

The actress and Baruchel split soon after, due to the thing that caused her leaked photo in the first place: distance. The Canadian actor was last seen in This Is The End, and is staying busy with his career — mostly from Canada. He’s currently working on as many as five different projects.

You can see Pill now in Season 2 of The Newsroom, and she just wrapped Cooties with Elijah Wood and Rainn Wilson. The film is due out in 2014.