On Romancing the Joan, a lot of big moments happen in a relatively short time span! Let’s take a look at what you may have missed. 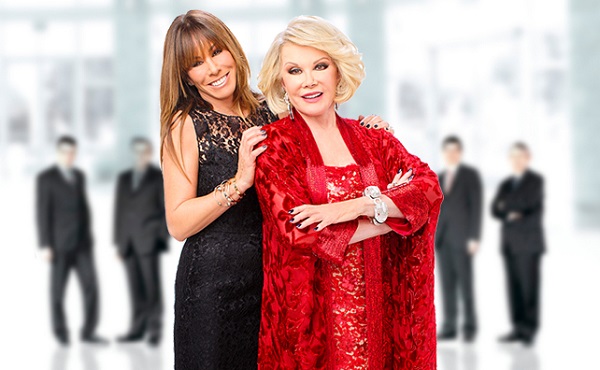 When Joan Rivers is involved in a project, you never know what will happen. She proved that point repeatedly during the first few episodes of Romancing The Joan. She changed, bent and broke all the rules of normal dating competitions and, well, we love her for it.

In love with RTJ? Here’s some of our favorite quotes from The Joan >>

Perhaps the biggest shocker (so far) was when Rivers didn’t even show up for the introduction of the scent gents. Instead of standing beside Melissa and meeting her hopeful companions, Joan hung out in the production booth and sipped champagne while the bachelors poured their hearts out to a camera that she watched via satellite. Nice move!

There were quite a few other surprises within the first few episodes, too! For instance, who was expecting Raspberry Richard to go ahead and propose marriage during the introduction? (And did you take a gander at that ring?) Let’s not forget the sudden torrential downpour that came with After the Rain Ryan, either. It looked so refreshing, we could have dove into the rain with him.

Meet the scent gents from Romancing The Joan >>

We’re also certain that before the end of the show, Jean-Pierre is going to get lucky with one of the Rivers. First, he hit on Melissa during the intros. Then, he got that crazy tattoo of Joan Rivers’ face! That’s commitment, sure… but why did he have to cover up those gorgeous abs?

Later, there was even some drama when Red Velvet Randy made breakfast “for Joan” using all the food in the house. Needless to say, not everyone was thrilled with the lack of leftovers when they returned from their workout. At least Rivers was happy, though, right?

Meet the cast and crew behind RTJ >>

While we’re disappointed about missing out on that exquisite-looking breakfast, we’re even more bummed we missed the smelling competition. We’d love the chance to cuddle up to some of those chests and take a sniff at those necks. Who wouldn’t?

We’re glad we missed out on those speed-dating sessions at the beach, though. From the chanting to the speed-talking in an awful accent, those dates were just a disaster. We agree with Rivers: The best of the dates was her entirely silent ride with Lavender Luke. He’s so awkward, but at least he’s himself… and quiet.

For all the latest info on Joan Rivers, sign up for our newsletter >>

We can’t wait to see what happens next. In the meantime, get to know the men of Romancing the Joan a bit better, and check back each week for more videos here.