You’ll never guess what awesome celebs you’ll get to see samba this season! 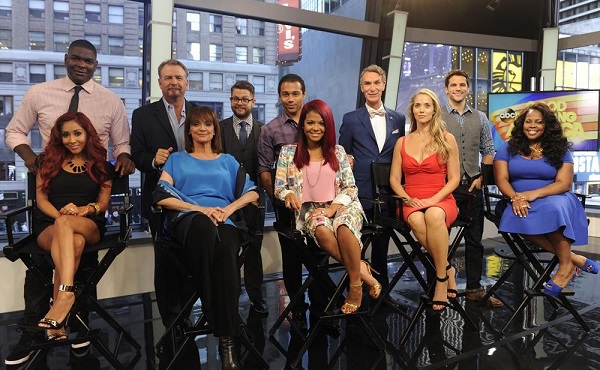 Rumors have been swirling for weeks but now we finally have our answers! The Season 17 cast of Dancing with the Stars was revealed Wednesday Morning on Good Morning America. Were your guesses right?

Leah Remini and Valerie Harper are in! Perhaps the two names thrown around the most, Remini and Harper have been the center of their own buzz, as well as Dancing with the Stars predictions. But will their former news cycles help or hinder their chances at winning?

We always knew Harper would make the cut! >>

Harper became a household name when she starred on The Mary Tyler Moore Show as Mary’s loud and sassy friend, Rhoda. Once the show ended, though, Harper never quite earned that same success. However, she recently found herself on the tips of tongues everywhere when she announced that she’d been diagnosed with terminal cancer and had only three months to live. A few months past her expiration date, docs are claiming she’s on her way to a full recovery and Harper is lacing up her dancing shoes. Will viewers of the original airing of MTM and fans of the series when it made regular appearances on Nick at Nite help keep the actress afloat? Or will her recovered health suddenly make fans feel duped?

Meanwhile, Remini will have her own demons to dance with throughout the season. While everyone loved her as the sarcastic New Yorker wife in King of Queens, Remini has made a new name for herself. In recent months, she made a rather gruesome public departure from the Church of Scientology. With a reported 55,000 Americans identifying themselves as Scientologists, will her rift with the church have her going into the game with tens of thousands of enemies?

Sadly, we also already knew not to expect Paula Deen on the list >>

There’s a pretty impressive group of women rounding out list of female competitors. Actress Elizabeth Berkley danced during her time on Saved by the Bell and in her movie Showgirls and she’ll be joined by the gorgeous Amber Riley, who has been known to bust a move on Glee. R&B singer Christina Milian has also demonstrated her dancing abilities in various music videos, but can she pull off a tango? Oh, and Snooki will be there, too.

As for the men: DWTS has collected quite the interesting cast of macho men ready to do the merengue. Former NFL player Keyshawn Johnson will trade his cleats for dress shoes. Redneck comedian Bill Engvall and outspoken science enthusiast Bill Nye will have to rely on their feet instead of their wit to get them through this new challenge. Meanwhile, DWTS is hoping Pretty Little Liar‘s Brant Dougherty and High School Musical‘s Corbin Bleu will bring in the teenyboppers. And after overcoming some series health issues himself, Jack Osbourne will round out the cast for the guys.

ABC’s Season 17 of Dancing with the Stars will premiere on Sept. 16.

For more TV updates, sign up for our newsletter! >>