Dancing With the Stars is taking us back in time with its recently announced contestant lineup. That’s right, this season is going old school. But who’s fresh and who needs to be aired out far from the stage? 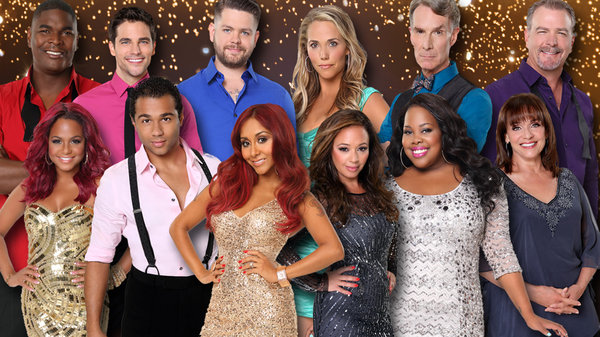 Can you believe Season 17 of Dancing With the Stars premieres tonight? Neither can we. With a long line of contestants throughout the series including Olympic champions, NFL stars and entertainment favorites, this season might just boast the best cast yet.

In case you missed it, here’s the lineup this year:

Sadly, we also already knew not to expect Paula Deen on the list >>

Who is your favorite contestant, and who could you live without? Here’s who we’ll be watching:

We will be floored if the man can actually bust a move, which makes him all the more enjoyable. Who cares if the man can dance as long as he throws out some sciencey facts and always wears a bow tie. We’re looking forward to seeing the old guy shake, if only to remind us of our childhood. We kinda can’t wait. Bill Nye might just might win the whole thing. Here’s to hoping. We already love him. He just has to continue to charm our hearts. Do we hear a number in a lab coat coming?

If this girl is anything like her character on Glee then she’s going to be amazing. Confident and intelligent, we think she can really bring her stuff to the show. It will be great to see her collaborate with Derek Hough. They will, no doubt, be a power team. Maybe we’ll even get to hear her sing in an episode. With her pipes and some fancy moves, she’s sure to shine.

Jack Osbourne has definitely grown up since his days on The Osbournes. We think he’ll present himself in a professional and charming manner, as we’ve seen him in the public recently throughout his diagnosis with multiple sclerosis. Plus, he might just tear up that dance floor. We think he could have the goods to take him far.

Remini made a name for herself on King of Queens, but was recently in the headlines when she made a very public departure from the Church of Scientology. We can’t wait to hear what she has to say on the show!

We always knew Harper would make the cut! >>

Snooki will go far in the show, no doubt, only because people seem to love watching her, but if she’s trying to make a comeback post-baby, the odds are not in her favor. The poof is so yesterday.

Who? Exactly. Daugherty had a stint on Pretty Little Liars back in the day. He played Noel Kahn (who dated Mona). Yeah, sure, he’s got the looks. But, um, what else? We hope we find out. We’d love to know more about this actor who may or may not have a promising career.

Don’t get us wrong, we love some Saved by the Bell, but what’s Berkley’s story now? She can only bank on her Saved by the Bell fame for so long. Thanks to her Showgirls days, she may actually be able to dance, but people want more than dancing on the show. They look for endearing stories and someone worth rooting for. If Berkley wants us to cheer, she’s got to bring more than her past.

Who will win Season 17 of Dancing With the Stars, and who will leave the show early?