Gwen Stefani and Gavin Rossdale may be expanding their brood! Is baby No. 3 on the way? 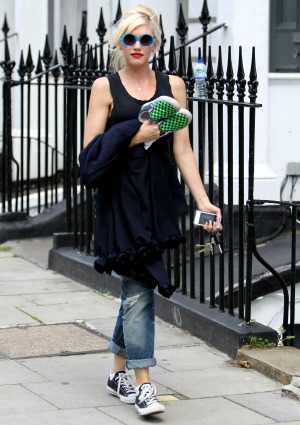 Gwen Stefani and her husband Gavin Rossdale are expecting their third baby together, sources close to the couple say.

“Gwen and Gavin couldn’t be happier,” an insider told In Touch Weekly. “She’s just trying to focus on resting right now. She wants to make sure that all is well with the baby.”

The Hollywood power mom, who has been married to Rossdale since 2002, already has two sons, Kingston and Zuma. Stefani told Vogue that having them completely changed her life.

“It’s super fun being a mom, but it’s not what you think it’s going to be,” she said. “At first, your life is totally the same. And as they grow older, it really does start to change your life. Like, “Oh, my God, they have school, they have to get through first grade, they have to learn to read. It starts getting so serious, and you’re like, ‘Aaaaaaah!'”

Last year, she revealed to Marie Claire that she and Rossdale had tried to expand their brood back in 2010, but it did not come to fruition.

“I really, really, really wanted one about two years ago. And it didn’t really work out,” she explained. “So… I feel good with what we’ve got. Everything works out how it should. You can’t plan anything, right? You can try.”

If she is preggo, the new baby is going to have to learn how to defend itself pretty quickly, because its two big brothers are a bit rambunctious.

“From the moment they wake up, they start beating on each other,” she told Marie Claire. “I never knew they would be so physical. They’re just starting to play real well together, but with a lot of fighting. They do look out for each other — especially the little one, he really loves his older brother.”

Stefani’s rep won’t holla back with a confirmation.