Before there was Adele, there was another powerhouse that no one could touch. She’s out with a new single, and I’m swooning. 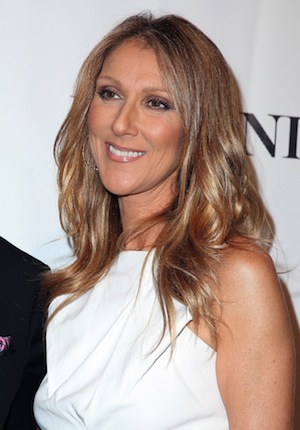 I mean, really, who tops her?

Have you heard “The Power of Love?” OK, I know you’ve heard the Titanic movie theme song, “My Heart Will Go On.” Yeah, even my flute recorder can’t go that high.

What am I doing? This woman needs no introduction. It’s like prompting Madonna, or even Lady Gaga. (Don’t shoot me, I’m aware that they all are in different leagues).

Dion has been revived with her latest single, “Loved Me Back to Life” and though the lyrics are touching, it’s her trademark, full throttle delivery that has me gushing. The track is from her upcoming album, also titled Loved Me Back to Life, which will be in… English!

This diva is not only selling music, but she’s selling her house, too! >>

Just in case you didn’t know, her last English-language album was dark ages ago, in 2007.

For all of you Céline fans, you probably already have listened, loved and repeated this song ever since she debuted it for all to hear during a live concert in July. But don’t ruin it for the rest of those who haven’t, and let them hear this blissful tune featuring our favorite heroine who performs daunting vocals with unparalleled fervor.

If you’re expecting this to be a “classic Céline” song, you’re out of luck though, fans. She’s not the Céline of the ’90s or the 2000s — this is Céline in 2013. And in terms of what to expect, it’s got a pop flair that YouTube commenters compare to Rihanna, of all people — but by the time the chorus hits, there is no denying that it’s Dion.

Love all things music? Don’t miss a beat by signing up for our newsletter! >>

All right, the wait is over. Check out the single and let me know what you think! Does this release show promise for her album? Does she disappoint you and make you miss her old music? Or do you think she has aged gracefully and accommodated a modern sound?