Olivia Wilde is a successful actress with a successful boyfriend, but like many others, is thinking about her upcoming 30th birthday. She knows it only gets better from here. 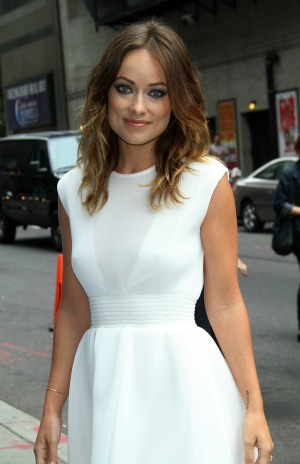 At the age of 29, Olivia Wilde has done more than many people could hope to accomplish in a lifetime. She has had a successful TV career, is building her successful film career, has become a fashion icon and is about to marry the man of her dreams.

But like many 29-year-olds, the actress is looking forward to that 30th birthday. She shared her thoughts with Glamour magazine about the impending date.

Olivia Wilde gushes over Jason Sudeikis: “So cool, so funny” >>

“In human years I am 29. In actress years I’m the ripe, promising age of 18 to 35,” she said. “That’s how it works here in Hollyweird. Back in the human world, though, I’m hitting a major milestone: 30, or as I like to call it, the ‘Cut the Bulls**t and Go Be Awesome’ stage. I’m thrilled about this impending development (I might finally grow boobs!), but my brain has some catching up to do.”

“People assume actresses are afraid to get older; the truth is the roles get a whole lot more compelling once you’re too old to play dumb,” she explained. “So I’m welcoming this development with open arms, and so should you.”

Wilde offered some tips about turning the big 3-0, starting with not worrying about others who have accomplished more by your age.

“Yes, Einstein had discovered the theory of relativity by your age, and Emily Brontë had written Wutheringf***ing Heights, but honestly, what you achieve is far less important than what kind of human being you are,” she revealed.

The actress also reminded all soon-to-be-30-somethings that women finally hit their sexual prime in their 30s, and they should enjoy it. She explained that, “it’s finally your turn to act like an 18-year-old boy — except you’ll be 1,000 times better at… everything.”

Thirty-year-olds should enjoy their age, and Wilde is obviously excited for what her future holds. Her Glamour piece encourages everyone to embrace what they have, while not freaking out about the birthday. She stresses that women should not go “husband hunting” or be pressured to have kids, but to enjoy your life as it comes.

Wilde’s big birthday is coming up on March 10, 2014, and she is also currently planning her wedding to Jason Sudeikis. You can see her next in Drinking Buddies.