Calvin Klein is apparently a little upset that David Beckham refused to strip down to his undies for the designer. 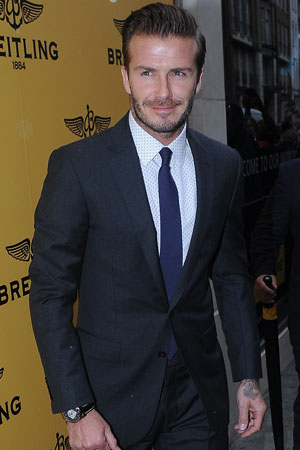 David Beckham never shies away from a good strip down — he’s known for baring his body on the soccer field and in his H&M underwear commercials. However, his people gave a well-known designer the cold shoulder when he approached the soccer star in 2006.

In the new issue of Interview magazine, Calvin Klein tells Marc Jacobs that Beckham wasn’t allowed to appear in ads for the designer’s underwear line. Why? He was way too famous to do it!

“I had wanted David Beckham, and we had discussions with David’s people and they said, ‘You can have him for the rest of the world, but you can’t have the U.K. because he’s too popular,'” Klein recalled. “I said, “We do business in the U.K. What am I supposed to do there? Use someone else?” So that was a no. They weren’t ready. So we got this other guy instead.”

The “other guy” ended up being now-retired soccer star Freddie Ljundberg.

Klein wasn’t done dishing on celebrities, though. According to the designer, Mark Wahlberg was quite the handful back in his underwear modeling days.

“I didn’t want anyone else. But he was trouble,” Klein said of Wahlberg. “Oh my god. He and Kate [Moss] couldn’t stand each other.”

“I had a tough time with her, too,” Klein added. “From the very beginning. She had gone through some difficult times, and it sometimes came through in the work and in the attitude… She ended up being really great, though. But the earlier stuff was part of that whole opposite wave.”

So, celebrities aren’t nice and perfect all the time? Color us shocked!