Kerry Washington’s a newlywed, but you won’t hear about it from her. The actress reveals her new mantra when it comes to keeping the press out of her bedroom. 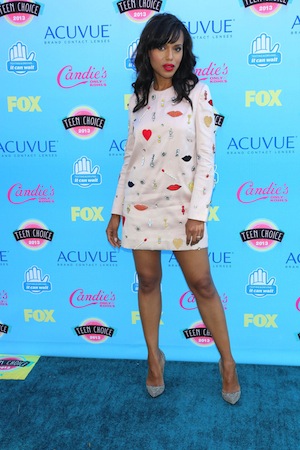 Actress Kerry Washington is gearing up for another heart-stopping round of Scandal. She’s currently filming the third season of the ABC drama, which is set to premiere next month. The actress is experiencing serious personal and professional growth.

Over the summer, two major events occurred: Washington received an Emmy nomination for Outstanding Lead Actress and she got married! Even though she’s extremely happy about her nuptials, she prefers to stay mum on marriage.

In the October issue of Glamour (via E! Online), Washington reveals how and why she’s chosen to keep her private life private.

“I learned through experience that it doesn’t work for me to talk about my personal life. I’ve had earlier times in my career when I did talk about it. I was on the cover of a bridal magazine [InStyle Weddings, in 2005, when she was engaged to actor David Moscow],” she says. “But I couldn’t just turn around and say, ‘I only want to talk about the good stuff, but not the bad stuff.’ So I just thought, ‘OK, no more.'”

Even though she’s keeping her relationship under the radar, she’s not hiding it. “I’m walking around in the world with my ring. And when people say congratulations, I say thank you. But I’m going to continue to not talk about it and just let it unfold.”

Whatever floats your boat. Congrats to Washington and her football player husband, Nnamdi Asomugha.

What do you think of Washington’s new press policy?